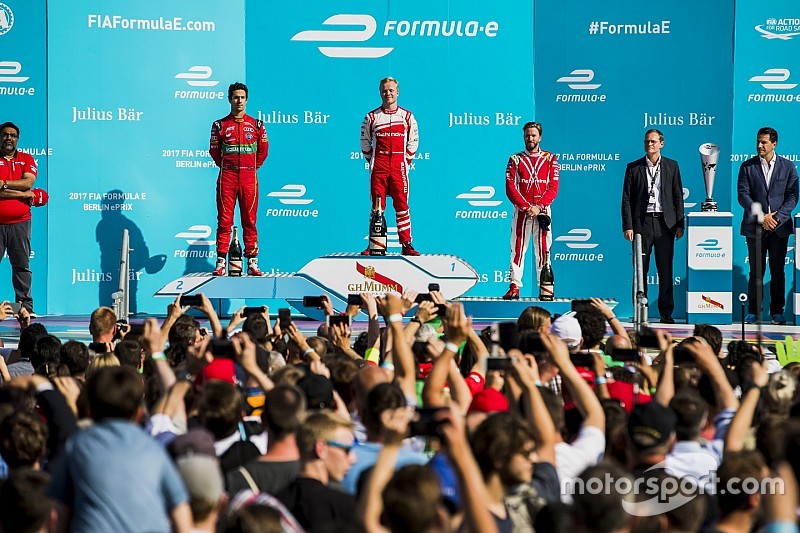 A Formula E super fan handed out the winners’ trophy to Berlin ePrix victor Sebastien Buemi last Sunday in a move to include direct additional fan experience in the all-electric championship.

Welsh ‘Super-Fan’ James Harmon appeared on the podium next to Formula E CEO Alejandro Agag and described his experience as ‘the greatest day of my life, it is only just sinking in that a dream has come true.’

The 21-year-old was given the surprise invite by the championship to hand out the winners’ trophy on the podium, which has been a key fan focused aspect of Formula E since the start of the championship in 2014.

Formula E has accelerated its fan engagement during the current season with an expanded fan village which has been rebranded in deference to new partner Allianz. The podium is located within this village and is free to access for the fans.

"The brilliance of our event management and event experience team was showcased once again at the Berlin ePrix last weekend," Formula E’s Renato Bisignani told Motorsport.com.

“The podium ceremony in the Allianz eVillage continues to be one of the most ground-breaking in motorsport, and in Berlin we took it a step further giving a fan the chance to hand out the trophy to race-winner Sebastien Buemi.”

“It was amazing to see James standing shoulder-to-shoulder with the drivers in front of the crowd, a truly emotional moment for him. We wish to thank James for the passion and support he has dedicated to Formula E. After all, Formula E is about FanBoost.”