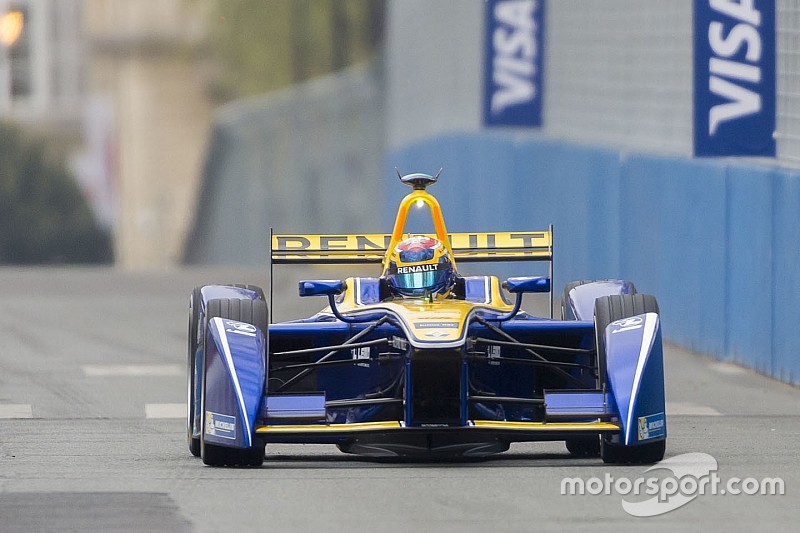 Sebastien Buemi won a dramatic Berlin ePrix this afternoon to narrow down the points gap on title rival Lucas di Grassi, who finished third, to just a single point with two races remaining.

Apart from a brief battle with poleman Jean-Eric Vergne in the early laps, Buemi was in complete control of the race to register his third win of the campaign.

Buemi’s authority in the race was underlined when he opened out an eight-second gap to his rivals before the mandatory pit-stop.

From there, the Renault e.dams racer was in complete control and took the chequered flag unchallenged, despite a late race Safety Car after Loic Duval crashed his Dragon Racing car.

The race started with poleman Vergne losing his advantage to Buemi, as the Renault e.dams driver dived in to the first hairpin in the lead after a superior getaway.

The Swiss driver’s lead was short-lived, however, as Vergne fought back and put a move on Buemi to reclaim the top spot at the start of lap two.

Initially, Vergne started to pull away slightly, but Buemi was soon able to again pressurise the DS Virgin car and the lead swung back into the Swiss driver's favour when he made a daring pass at Turn 5.

Buemi then put the hammer down and opened up a significant gap, which had stretched to eight   seconds by the time of the car swap stops.

Vergne had lost second position to Daniel Abt on lap 10, the German making a fine move at Turn 1. Vergne’s Virgin DSV-01 was then also caught by Nicolas Prost’s Renault but the Frenchman was unable to find a way through.

At that point, several drivers had had their races effectively ruined by a spate of black and orange flags for damage to be fixed on their cars.

Both NEXTEV TCR cars of Oliver Turvey and Nelson Piquet Jnr, Rene Rast (Team Aguri) and Sam Bird (DS Virgin) all stopped because early-race contact had deemed their cars dangerous. Bird was particularly frustrated with his penalty, venting his fury on the pit radio.

There was frustration in the DS Virgin pit again as Vergne was also given a black and orange flag when he damaged his front right nose section.

Before he could serve the penalty however, Vergne lost a further section of his wing against the chicane kerb and contacted the wall. The result of all this drama for the poleman saw him emerge from the pits in fifth position.

Buemi re-took the lead after his stop, whereas di Grassi stayed out an extra lap after saving energy during a canny opening phase of the race by the Brazilian. The Abt Schaeffler FE01 rejoined after its later stop in fourth place.

Just two laps after the mid-race stop,s a Full Course Yellow was called to clean up the debris caused by Vergne’s earlier contact with the chicane wall.

When the green flag flew again on lap 28, Buemi had an 11-second lead and was essentially home alone to cruise to the chequered flag.

Behind though there were numerous scraps for the crowd to savour, not last the battle for second place between Abt, Prost and a flying Di Grassi.

The scrap was resolved in Di Grassi’s favour on lap 39 when Di Grassi sold Prost a sensational dummy into Turn 1 and slipped through on the inside.

Di Grassi soon homed in on Abt but, before he could make a move to claim an extra three points, the Safety Car was deployed and stayed out until just two laps before the end of the race.

The matter seemed to be resolved when the team instructed Abt, over the radio, to let Di Grassi through.

However, Abt did not relinquish the position and took the flag a delighted second to the bewilderment of his team. Di Grassi is set to face an investigation for speeding during the Full Course Yellow period.

Prost finished fourth ahead of Vergne, with Robin Frijns claiming sixth after another superb drive through the field from 12th on the grid.

The Dutchman made arguably the move of the race on Duval in the opening exchanges with a spectacular outbraking move at the hairpin.

Finishing seventh was Nick Heidfeld (Mahindra), who like Frijns, scythed his way through the field from the rear of the grid after he was given a post-qualifying penalty, along with Senna and d’Ambrosio, for running wrong tyre pressures.

Apart from Duval, only Rene Rast was not classified after he didn't complete the requisite amount laps. This was due to a lengthy pit stop to repair a broken rear wing on the first lap of the race.

The German, however, showed exceptional pace on his debut and held the fastest lap on several occasions before Senna took the two points late in the race.