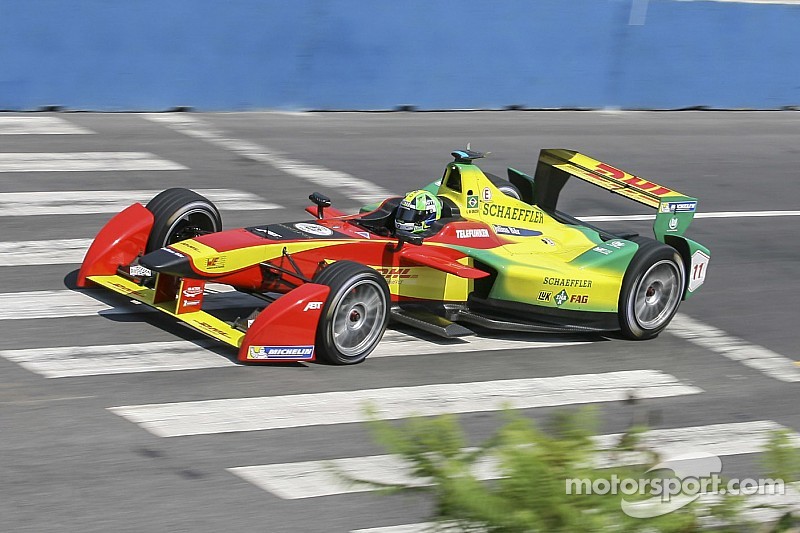 Drivers Daniel Abt and Lucas di Grassi compete in the sixth race of the season in Long Beach on the doorstep of Los Angeles.

Hollywood, Sunset Boulevard, Beverly Hills: after the race in Miami three weeks ago, California now hosts the Formula E on Saturday (April 4). Drivers Daniel Abt and Lucas di Grassi compete in the sixth race of the season in Long Beach on the doorstep of Los Angeles  and before the start of proceedings enjoy the next magical backdrop on the electric racing series calendar.

Daniel Abt and Lucas di Grassi tread the Walk of Fame

What is a must see when visiting Los Angeles? Obviously, a stroll along the legendary Walk of Fame, on which many celebrities are immortalized with stars in the ground. In addition to Spiderman, Mickey Mouse and Shrek, Daniel Abt and Lucas di Grassi also stumbled across Chewbacca from the movie series Star Wars. Perfectly entertaining warm-up for the weekend at the foot of the Hollywood Hills.

Exhausting weeks for Lucas di Grassi: last weekend, the Audi driver appeared with his team mates at the Prologue for the FIA World Endurance Championship WEC in Le Castellet. On Saturday, the current second-placed driver in the rankings completes the sixth round of the Formula E in Long Beach, before his agenda takes him to the opening race of the WEC season next weekend.

Daniel Abt guest on Heimspiel

Premiere for Daniel Abt: on Monday, the 22-year old racing driver made his first ever appearance on Heimspiel the program broadcast by the Hessischen Rundfunks (Hessian Broadcasting). Together with the former long-serving Mercedes Motorsport Director Norbert Haug, the youngster analyzed Sebastian Vettels first win for Ferrari and looked ahead to the Formula E race in California. Haug will also be watching. Formula E produces exciting races and will receive plenty of attention, says the ARD motorsport expert.

Kickoff to the weekend: the track walk

An integral element in the calendar of drivers and engineers is Fridays track walk, a lap on the circuit on foot. This inspection is enormously important in Formula E. Because we only race on temporary tracks, and also have very little practice time, we have to know the peculiarities and crucial parts of the circuit exactly before we complete our first laps with the racecar, says Daniel Abt.

Daniel Abt to debut at Le Mans

Daniel Abt faces up to a completely new motorsport challenge this season: in parallel to his Formula E activities, the 22-year old racing driver will contest the FIA World Endurance Championship WEC with Rebellion Racing. He will make his race debut in the famous 24-hour classic at Le Mans. Daniel Abt: Le Mans is a motorsport legend  its a cool feeling to know that I will be on the grid there this year.

On the road with Volkswagen and VfL Wolfsburg

This partnership is moving on: the team travels with the Volkswagen shuttle fleet again in California  a cooperation that evolved from mutual partner VfL Wolfsburg. The football club displays its logo on the cars driven by Lucas di Grassi and Daniel Abt.