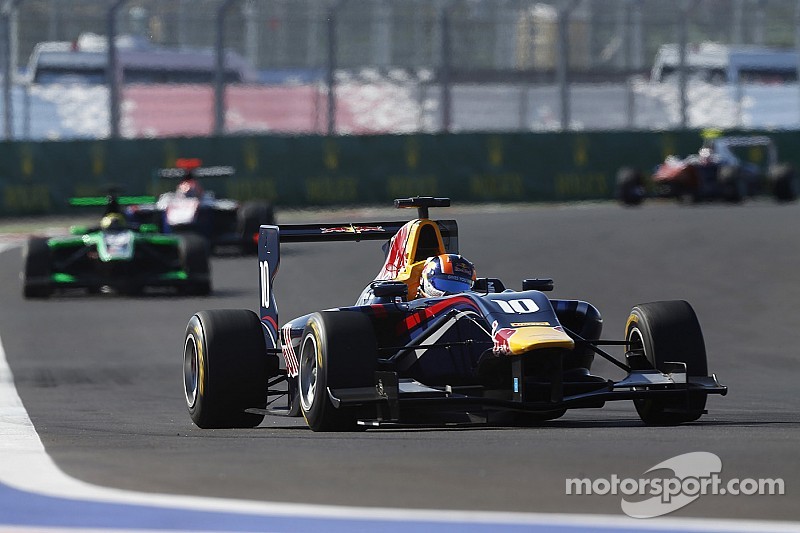 Dean Stoneman is the only driver who can mathematically prevent Alex Lynn from becoming the fifth GP3 champion.

The glorious setting of the Yas Marina Circuit hosts the mouth-watering GP3 finale of the 2014 season. Carlin and Red Bull Junior Team driver Alex Lynn has one hand on the elusive GP3 trophy with a 48 point lead in the Drivers’ Standings. Koiranen GP’s Dean Stoneman is the only driver who can mathematically prevent Lynn from becoming the fifth GP3 champion: if he scores the maximum points on offer over the weekend and Lynn fails to score – setting up a dramatic conclusion in Abu Dhabi.

The racing itself is really cool, last year we had a night race but this time GP2 will get that honour.

There is huge competition amongst the drivers to finish within the top three in the standings too with Stoneman, Marvin Kirchhöfer, Jimmy Eriksson and Richie Stanaway all hungry for silverware. Carlin are also hoping to wrap up their first teams’ champion’s trophy after leading the standings from the opening round. But ART Grand Prix are hot on their tails, the French squad has won the teams’ trophy for four consecutive years and will want to make it five in a row – so it’s all to play for! In a change in schedule – practice and qualifying will both take place on a Friday.Pirelli have nominated the soft tyre for this event.

Pirelli's racing manager Mario Isola commente: “The varying conditions are likely to be the biggest challenge for the GP2 and GP3 drivers at Abu Dhabi, and this means that drivers have to adapt their driving style to extract the maximum performance from the package.

As the Series is decided in GP2, we can look forward to a straight fight for victory, with nothing else at stake apart from race wins. In GP3, the title is yet to be completely settled, so how the protagonists decide to manage their tyres will be crucial to the race.

Track evolution affects the support championships even more than Formula One™, as they are first onto the track. With both GP2 and GP3 drawing to a close, we’re delighted to take part in a number of promotional activities in Abu Dhabi that showcase both series, such as the GP2 pit stop challenge on Thursday, and of course the Pirelli scholarship cheque that we will hand out to the highest placed GP3 driver at the official prize- giving on Sunday.”

Dino Zamparelli (Art Grand Prix): “Firstly, Abu Dhabi is a really nice place to go because it’s always really hot (and you get a great tan) – he said with a big smile. The racing itself is really cool, last year we had a night race but this time GP2 will get that honour. It was so special to race under the lights at such a cool venue. The track is really modern, I really enjoyed it last season. The track is really fun to drive, really long and flowing. There are some opportunities to overtake, especially on the long back straight. It’s very challenging for the drivers which I like. We could push quite hard on tyres last year but it depends how hard you go on set-up.”

• The best rookie is Alex Lynn (Carlin) who leads the Series on 185 points.

• Marussia Manor Racing will not participate in this event

• There are several driver changes this weekend: Ryan Cullen is back in the GP3 field, racing the #24 at Trident and rookie Ling Kang from China will drive the #23 Trident.

• Alex Lynn needs just one point to take the GP3 Driver’s crown. Stoneman is the only other driver who can stop him and would need to score the maximum points of 48 with Lynn failing to score to become the title winner.

• You can re-watch every round with the video highlights on the official website // Multimedia Section.