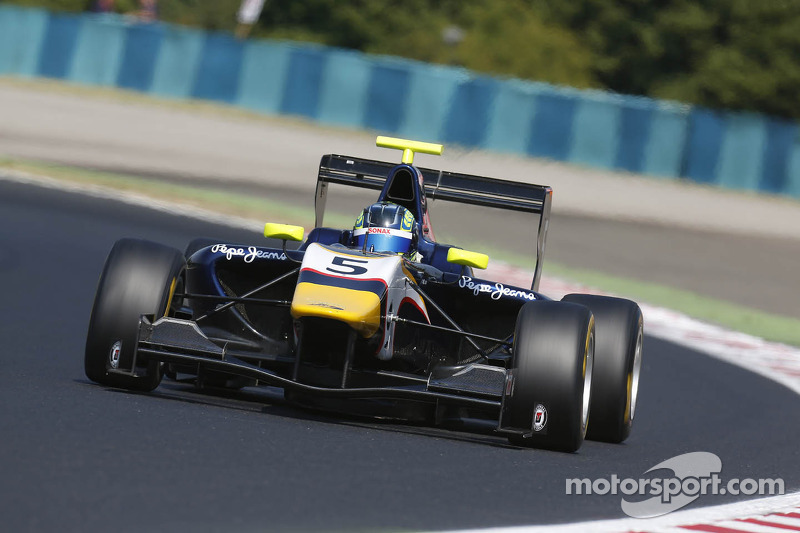 Lights-to-flag! Robert Visoiu made the most of his reverse pole and controlled Race 2 in Budapest, soaking up the pressure after the safety car was deployed meaning a final two lap dash. It was a great day for MW Arden with the team recording first and second with teammate Carlos Sainz in P2. Koiranen GP’s Kevin Korjus was third.

Reverse pole-man Visoiu made a good getaway whilst Korjus was slow away at the start which gave Sainz the opportunity to pounce and pass the Estonian. The Spaniard was all over Visoiu going into Turn 1, but the Romanian defended well and squeezed the MW Arden rookie to the outside allowing Korjus back into second.

By the end of lap one Sainz had re-passed Korjus into second position with Visoiu gathering his pace to hold a small advantage. ART Grand Prix’s Facu Regalia and Jack Harvey held fourth and fifth whilst Race 1 winner Aaro Vainio (Koiranen GP) lost three places at the start.

Jenzer Motorsport’s Alex Fontana had a premature end to his race after spinning out on the opening lap, whilst contact between Marussia Manor Racing’s Ryan Cullen and Trident’s Emanuele Zonzini also meant they retired early with damage to their cars.

Meanwhile at the front of the race, Visoiu began to stretch his lead to over four seconds, with a two second gap between Sainz and Korjus. Trident’s Giovanni Venturini began attacking Harvey for P5 whilst Series leader Tio Ellinas (Marussia Manor Racing) spent most of his race behind Status Grand Prix’s Jimmy Eriksson in the fight for P10.

Contact between Bamboo Engineering teammates Melville McKee and Lewis Williamson meant an unfortunate end to their races and due to the damage to their stricken cars, the safety car was deployed with four laps remaining. Once the race was re-started there were two laps for everyone to push and again Visoiu controlled his lead and pulled a vital deficit to Sainz and co.

Ellinas made up a position when Eriksson ran wide on the final lap, the Cypriot finished P10 but outside of the points. Therefore after eight consecutive points finishes for the Series leader, this weekend the Marussia Manor Racing driver leaves Budapest with no extra points to his tally.

Regalia did everything he could to steal the final spot on the rostrum, harassing Korjus but the Estonian defended off the Argentine’s efforts to take another podium result. Visoiu crossed the chequered flag 4.1s in front of Sainz, the Spaniard achieving his best result of his GP3 campaign. Korjus, Regalia, Harvey, Venturini, Daniil Kvyat (MW Arden) and Conor Daly (ART Grand Prix) completed the top eight points scorers.

The championship battle is down to just one point with Ellinas on 91 and his closest challenger Regalia on 90. It’s also tight behind them with Vainio, Harvey and Korjus all on 75 points. ART Grand Prix hold the lead in the Teams Standings on 236, with MW Arden moving into second place on 157 and Koiranen GP into third on 150.

GP3 now enjoys a summer break, with Round 6 at the legendary Spa-Francorchamps circuit scheduled for 23-25 August.