Valencia next stop for Daly

Conor Daly made his Indianapolis 500 debut before heading back to Europe to test in Hungary in preparation for the GP3 Series event on the Circuit Ricardo Tormo.

After some monsoon conditions last week in Hungary, GP3 teams expect dry Mediterranean sunshine throughout the upcoming weekend, June 15th-16th, where GP3 will for the first time stage a stand alone event. Rounds three & four of the Formula One support series will take place away from the eyes of Formula One at Circuit Ricardo Tormo in Valencia, Spain.

Daly spent two test days in his GP3 car last week in Hungary which helped him make the transition from the AJ Foyt, Dallara Indycar to the more nimble Dallara GP3 car. "There is absolutely no comparison between the Indycar and the GP3 car. They are completely different worlds and my focus now is totally on the GP3 championship. With the recent tests I feel that we are getting a better understanding of the car and Pirelli tires." 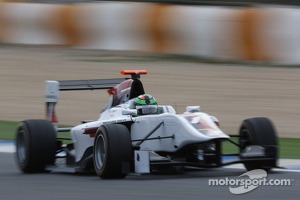 Daly lies fourth in the championship after the first two rounds in Barcelona, Spain where he finished third and fifth. GP3 is part of the Formula One support program with all races except Valencia taking place at rounds of the Formula One World Championship. The final rounds will be held in Abu Dhabi on November 1st-3rd.

GP3 has no television coverage in the US, however if you search on-line, (GP3 Valencia, Spain) there are multiple Euro sites that live stream the races. There will be live timing available on the GP3 website.

GP3 is back into action in Valencia