Vainio holds off Daly for win in Budapest 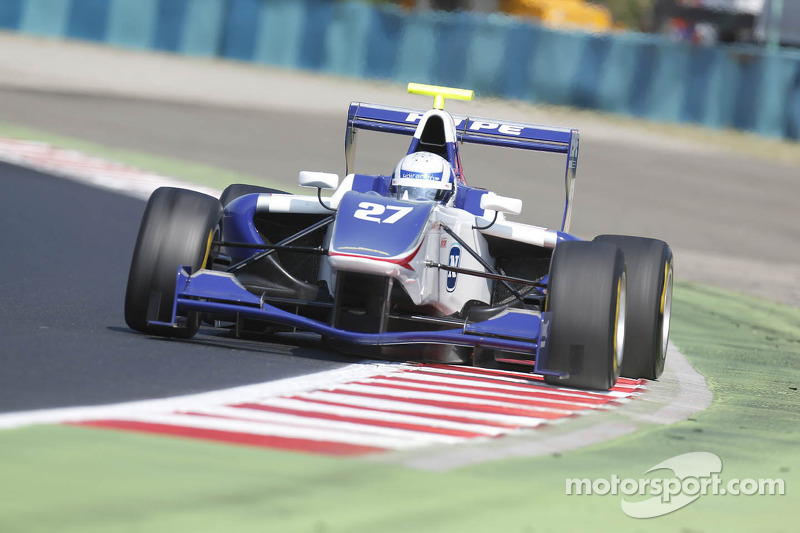 Koiranen GP’s Aaro Vainio victorious in Hungary Race 1 to become the first driver this year to win more than one race! Sunday's polesitter was earned by Robert Visoiu with the top 8 inverted grid.

The Finn started the day in style with pole position, Aaro Vainio is even happier now after achieving victory in Race 1 at the Hungaroring and pocketing further points for fastest lap. The Koiranen GP driver defended from ART Grand Prix’s Conor Daly in a race which saw a safety flag deployed with a final sprint finish at the end. MW Arden’s Daniil Kvyat recorded his maiden rostrum in third place.

Vainio made a good start to hold the lead with Daly and Kvyat close in pursuit. Kevin Korjus (Koiranen GP) dropped three places on lap one, down to P9, whilst Facu Regalia (ART Grand Prix) moved in the opposite direction, gaining three positions. Vainio tried to build an early advantage but the gap between himself and the American remained small during the 17 lap race.

There were battles throughout the pack, most notably GP3 Series leader Tio Ellinas who had qualified tenth. The Marussia Manor Racing driver lost a few positions at the start and Jenzer Motorsport’s Patric Niederhauser found a way through on the Cypriot after several laps. Ellinas then ran wide, which gave Giovanni Venturini (Trident) and his teammate Dino Zamparelli the opportunity to sneak through and steal more positions.

All eyes were on the fight between Bamboo Engineering teammates Melville McKee and Lewis Williamson for the final spots in the top ten, with McKee appearing to be struggling with tyre degradation and a big train of drivers behind joined the tussle. Williamson overtook McKee, soon followed by Niederhauser several corners later. There was a tasty dice between Alex Fontana (Jenzer Motorsport) and Venturini as the two went wheel to wheel, with Ellinas fancying his chance to pass the pair of them. However the Cypriot ran off track, costing him places, though he was to end up 12th, one place ahead of his teammate Zamparelli.

Vainio continued to hold a one to two second lead over Daly, with Kvyat, Jack Harvey (ART Grand Prix), Carlos Sainz (MW Arden) and Regalia next along. The safety car was deployed with five laps remaining following an incident between Luis Sa Silva (Carlin) who braked after Samin Gomez (Jenzer Motorosport) arrived in front of him. Emanuele Zonzini ran out of space and hit the back of the Carlin car, which sent the San Marinese driver airborne. The Trident driver was unhurt, but the safety car came out for three laps whilst both cars were removed from the track.

Once the safety came in, it was two laps of push, push, push. Daly seized his opportunity to pounce on race leader Vainio, attacking the Finn and actually making very light contact with the rear of the Koiranen GP car but the ART Grand Prix race winner was unable to pass Vainio in the final two laps.

Vainio crossed the line just over half a second in front of Daly, to achieve his third GP3 win of his career, his second of the season, thus becoming the sole GP3 driver to have won more than one race this campaign. Kvyat enjoyed his debut podium, whilst Harvey fought off Sainz’ strong efforts in the last lap to grab P4. Regalia, Korjus, Robert Visoiu (MW Arden), Niederhauser and Venturini completed the top ten.

With Ellinas failing to score, the championship has closed up with Regalia now just 11 points off the Series leader who remains on 91 points. Vainio has moved up to third in the title hunt on 75 points, whilst Daly and Harvey are on 70 and 69 respectively. ART Grand Prix continue to collect points in the Team Standings and have 219 to their name, whilst Koiranen GP bounce back and now have 140, with MW Arden on 128.

Visoiu will start from reverse pole for tomorrow’s Race 2 which starts at 09.25 local time.

Vainio scorches to pole in Budapest