Trident Racing's weekend in Budapest was positive for Venturini

David Fumanelli, Emanuele Zonzini and Giovanni Venturini ended the 5th round of the GP3 Series with valuable points at Hungaroring.

Trident ended the 5th round of the 2013 GP3 Series with a valuable points-paying position on their toll. ended the first race in 9th before rounding out the top-6 in Sunday's Race 2. 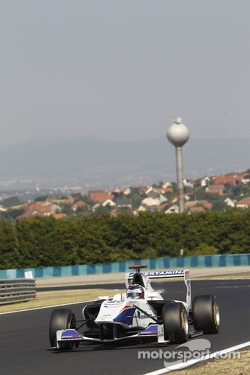 The Budapest weekend of the series started in a tough way partly due to an ill-fated qualifying session that prevented the three Trident drivers to enter the top-10. In Race 2, David Fumanelli finished in 16th, while Emanuele Zonzini was caught in an unavoidable contact that forced him to retire after 12 laps.

The San Marino-based drivers was hit by hard luck in Race 2 too as he was rear-ended during the third lap. Zonzini was eventually forced to retire again while Fumanelli crossed the line in 18th.

The GP3 Series will be back on-track from August 23 to 25 at the Belgian Spa-Francorchamps venue for round 6 of 2013.

“Overall the balance of my weekend is not negative but honestly I expected something more. In practice we found a good balance but in qualifying I made some mistakes that cost me some valuable tenths. In Race 1 I started bad but recovered up to the 10th spot, which turned into a 9th-place finish when one of the drivers I had in front got penalized. In the second race I got off to a good start. I tried to attack Harvey for half of the laps as I knew I was faster. Unfortunately, without mistakes from your opponent, passing at the Hungaroring is almost impossible. At least I was able to score points for the championship in both races”.

“My weekend at Budapest was quite disappointing. In practice we made some steps forward but it was definitely not enough. In this championship the 95% of your chances for a good result depends on qualifying and unfortunately that is one of our weakest links. I think the problem relies on the right use of the new tires which is penalizing us now. I started from the back in both races but I made a quick getaway each time. Then I got stuck in traffic at the end of a long line behind some other opponents. When I had the chance to run without traffic, my laptimes were similar to the frontrunners' ones and even quicker than the leader's ones in Race 2. The car performs well throughout the long runs and we don't have the tire degradation issues that make others suffer. Unfortunately, that increases our regret for the qualifying issues that keep hampering our week-ends”.

“My weekend has definitely been an extremely unlucky one! In both races I was involved in contacts that put me out of contention and which I wasn't responsible for. In Race 1, despite I started from the back, I made five passes before having to retire due to a crash started bu others. In Race 2 I was rear-ended after a few laps in turn 1, and I had to retire again. I hope that the race stewards will take some countermeasures because, if you give a closer look, It's always the same drivers that cause this contact which jeopardize other people's runs. The car's performance in race condition is very good. We still have to improve in qualifying”.

Very few satisfaction for Coletti in the Sprint Race of Budapest