Cold temperatures at Silverstone in England set the tone for the final preseason testing for the GP3 teams. Fumanelli set the pace for the Trident team, and their rivals.

A two-day GP3 Series test session was rounded out in the UK at Silverstone today. Cold weather and almost sub-zero temperatures, in addition to gusty winds, disrupted the activity of Trident and all the other contenders. 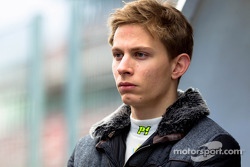 On the other hand, the team had something to celebrate in such an icy-cold environment thanks to David Fumanelli, who clocked the session's fastest lap overall. His best mark proved highly impressive as the closest followers stood 0.6 seconds back.

Giovanni Venturini and Emanuele Zonzini also provided the team with good results. Despite a mechanical issue that slowed him down, Venturini ended up into the top-10, while Zonzini improved his laptimes throughout both days on an unknown track for him.

The GP3 team of Trident is getting closer and closer to their 2013 debut. The first round of the season is scheduled from May 10 to 12 at Barcelona.

“I'm very satisfied with the results we achieved in this test. This morning I started with old tires also due to the cold temperatures, and when I put new rubber on, the improvement was so massive that I lost all my reference points. I didn't know what to expect but when I saw the laptime… it was really good! I would have never to stay at the top of the charts with such a wide margin! Then in the PM segment we decided to stay on older tires and we focused on longer runs, gathering some valuable data for the first round of the season”.

“The Silverstone test hasn't been very linear for me. In the first day I only turned about 10 laps due to an engine issue that led to a complete switch. Today I was finally able to log more laps and the balance is pretty good. We still had a couple of tenths of a second shave off compared to what I had expected, but the conditions were quite atypical and I can't figure out what we missed out. I will analyze the data with the engineers to get a clearer idea. I'm looking forward to the season. I think we have all what it takes to be off to a very positive start”.

“Before even starting to talk about the technical aspects the extreme cold is what I'll remember of this test! I'm also very satisfied with the overall results because Silverstone was completely new to me and it's a very fast and demanding track. As we expected, the laptimes improved constantly and all the preseason tests have been key for me. I know that the season will be very tough due to the general level of the series, which is pretty high, but it will be one exciting challenge”.

“We completed the preseason testing activity by gathering a very positive feedback. The laptimes have been the most evident aspect of our improvement, but there are many reasons for being satisfied. We already knew Venturini and we were proud to see both Fumanelli and Zonzini merge with the team and become part of a fantastic environment. The drivers make our job really nice and pleasant. I also want to thank the team's engineers, mechanics and all the other staff. It's been a demanding seven days of testing with a brand-new car, but there haven't been issues beyond the normal youth ones. We're confident for the rest of the season because we proved to be a very professional and consistent group from every point of view”.