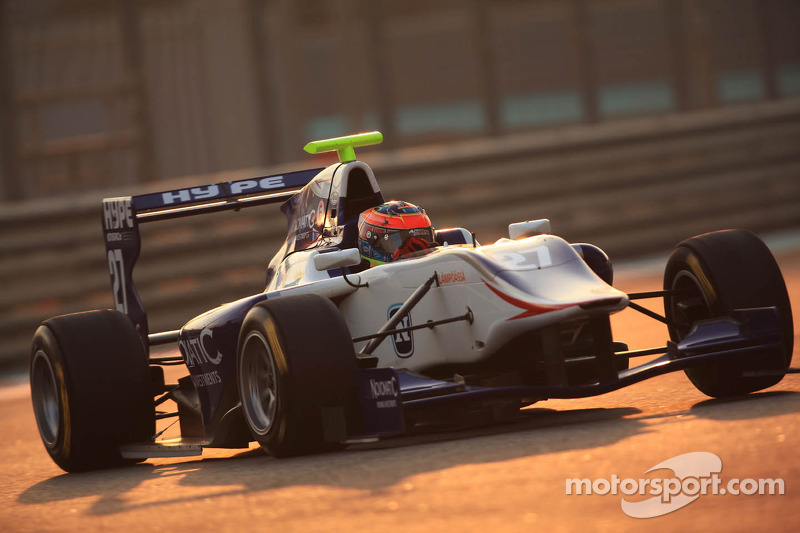 The 2013 GP3 race season may be over but the action resumed in Abu Dhabi with three days of post-season testing. Dean Stoneman who stormed to a podium in Sunday’s Race 2 at the Yas Marina Circuit led the way in both the morning and afternoon sessions with a best laptime of 1:55.829

Carlin’s Jan Mardenborough was first onto the track in the morning session which saw a full line-up of 27 cars taking part in the test. The British driver lapped in the 1m57’s with Adderly Fong (Koiranen GP) topping the timesheets early on. There was a short delay covered by the red flags when David Fumanelli made light contact with the barrier at Turn 8 in the Jenzer Motorsport car.

As the clock ticked down and the session continued, the times tumbled and it was Stoneman who shot to P1 and headed into the 1m56’s bracket. Dino Zamparelli testing for the MW Arden outfit was a few tenths off the Koiranen GP driver, with Alex Fontana in the ART Grand Prix machine third.

GP3 Series welcomed RUSSIAN TIME to the tests – the team who’ve replaced Bamboo Engineering and they had experience at the helm in the form of Sam Bird who was on hand for some development tests. The Brit was consistent and in the top four with Kevin Korjus (Status Grand Prix) just behind.

At the chequered flag, it was Stoneman, Patric Niederhauser, Zamparelli, Bird and Korjus. Jan Mardenborough was the highest placed rookie in sixth place, ahead of Melville McKee, Alex Fontana, Roman de Beer and Emil Bernstorff.

Following GP2’s turn on track, GP3 resumed to track activity for the afternoon session. The red flags were waved for a stoppage on track with Kevin Joerg’s stricken car. ART Grand Prix’s Pierre Gasly shot to the top of the timings, first to break into the 1m55’s and remained on top for an hour until Marussia Manor Racing’s Oliver Rowland lapped a few hundredths quicker to steal P1. As the test drew to a close, fastest man from this morning Stoneman was back on it…and clocked the best time of the day to end the day on top.

With a few clouds appearing and light wind, the temperatures were slightly cooler as the session continued. At the chequered flag it finished as Stoneman, Gasly (fastest rookie), Rowland, Bird, Korjus, Fontana, Marvin Kirchhofer, Mardenborough, de Beer and Nick Cassidy.