It was GP3 returnee Richie Stanaway who topped the first session of the 2014 season with a best laptime of 1:36.357. Trident’s Roman De Beer and Carlin’s Luis Sa Silva were second and third quickest.

Free Practice got underway on a glorious sunny evening at the Circuit de Catalunya with a track temperature of 42 degrees. Arden International’s Robert Visoiu and Status Grand Prix’s Nick Yelloly were first to take to the track in a full field of 27 drivers.

Nelson Mason (Hilmer Motorsport) spun into the gravel at Turn 4 which brought a premature end to his session. In the meantime, ART Grand Prix’s Marvin Kirchhöfer led the way with Carlin’s Alex Lynn second fastest. 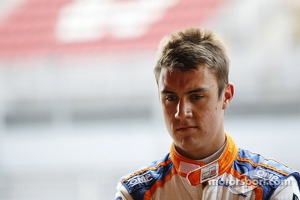 There was a brief red flag when Ivan Taranov’s Hilmer Motorsport car was cleared from the track after stopping on the circuit. Once the session resumed, Trident’s Roman De Beer jumped to P1 with six minutes remaining and further improved on his next lap.

Stanaway was on a flier though and shot to the top spot as the clock ticked down. Beitske Visser stopped on the track with a few minutes remaining, the rookie making her full debut in the GP3 car this weekend. Sa Silva rose to third as the chequered flag came out to mark the end of the forty-five minute Free Practice session.

Qualifying takes place at 09.45 am local time tomorrow morning – who will become the first pole-sitter of the 2014 GP3 Series season? It promises to be an epic weekend.