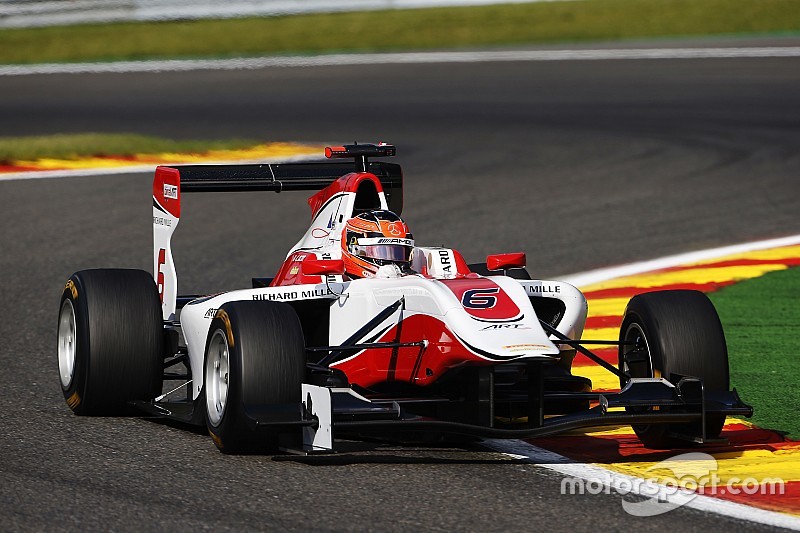 Esteban Ocon sealed a second victory of the GP3 season, holding off the challenge of Emil Bernstorff at the conclusion of a bizarre, incident-filled race.

Poleman Luca Ghiotto made a sluggish getaway from pole position, allowing Ocon through from second on the grid to lead the opening lap from Bernstorff, Kevin Ceccon and Ghiotto.

The points leader wasted no time in making up for lost ground, passing fellow countryman Ceccon for third at the final chicane - but tagging the Arden man's left-rear tyre with his front wing in the process.

Ceccon's tyre duly let go at Eau Rouge, putting him out of contention and leaving Ocon, Bernstorff and Ghiotto clear out front when Jann Mardenborough lost control of his Carlin-run machine and suffered a huge sideways shunt at the top of Eau Rouge.

This caused a Virtual Safety Car period, after which Ghiotto dived up the inside of Bernstorff for second before being handed a five-second time penalty for the earlier contact with Ceccon, effectively promoting the Brit back to second place.

That was how things stood when a second, lengthier VSC was called to remove the stricken car of GP3 returnee Beitske Visser.

Ocon appeared to jump the gun somewhat when the action resumed, maintaining his advantage over Ghiotto when a third VSC was caused by a crash at Fagnes between Sandy Stuvik and Matheo Tuscher.

The race got back under way on what appeared to be the final lap after the race clock reached zero, with Ghiotto being caught out and jumped by Bernstorff.

Confusion followed as the chequered flag was not there to greet Ocon at the end of the lap, forcing the Frenchman to hang on for one last tour to take the win by just over a second.

Ghiotto was third on the road, but his penalty dropped him down to sixth behind Marvin Kirchhofer, Antonio Fuoco and Jimmy Eriksson, who served a drive-through penalty for jumping the start under the VSC.