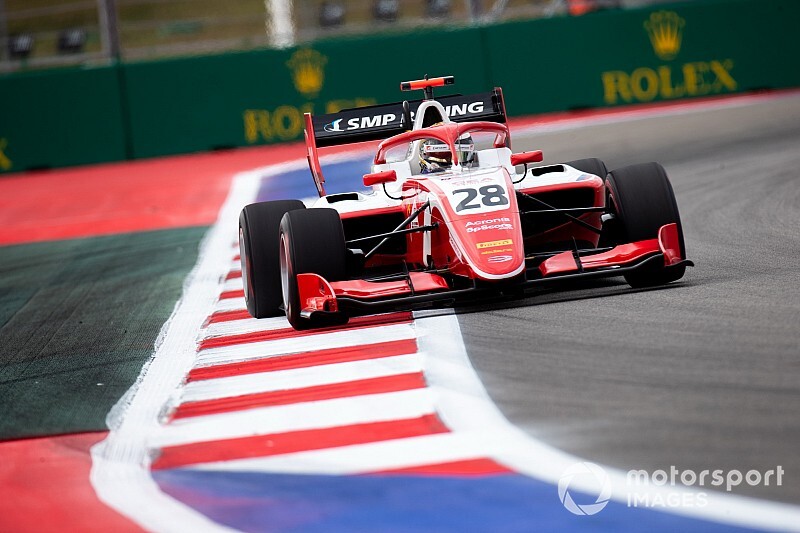 SMP Racing-backed Shwartzman didn’t appear to be in the fight for pole after the first flying laps, but after the initial runs were out of the way he challenged his Prema teammate Marcus Armstrong, who had set the fastest time in practice.

Shwartzman led into the mid-session break after a stunning final sector, and then once back out on track he improved twice, narrowly retaking pole from his closest title rival Jehan Daruvala – in the third Prema – on the last flying effort.

Pole gives Shwartzman four extra points and means he only needs to finish fourth in the first of the two races of the weekend on Saturday to clinch the title, or fifth with two points for fastest lap.

Daruvala hadn’t topped the session until after the chequered flag had fallen and was narrowly usurped by the series leader, meaning his deficit to the leader is 37 points with 44 on the table.

Armstrong went out later than his teammates for the final run and almost didn’t make it back for a final push lap, compromising his cool-down lap to reach the chequered flag in time. He held on to third as others failed to improve on the last run.

Niko Kari was a threat for pole all session long and delivered fourth for Trident ahead of Renault Academy driver and ART Grand Prix racer Christian Lundgaard, who delivered a late flyer after a scruffy session before that.

HWA’s Jake Hughes complained of heavy traffic and being “blocked” on his earlier runs, but managed to finish sixth late on ahead of the Trident of Pedro Piquet and last year’s GP3 race one winner Leonardo Pulcini.

David Schumacher, son of Ralf and nephew of Michael, marked his competitive F3 debut with 25th for Campos Racing – 2.3s off Shwartzman’s pace – as he steps in to replace the injured Alex Peroni, who had a huge airborne crash at Monza earlier this month.

Hon Chio ‘Charles’ Leong was 19th and 4.5s off the leader’s pace on his F3 debut with Jenzer.