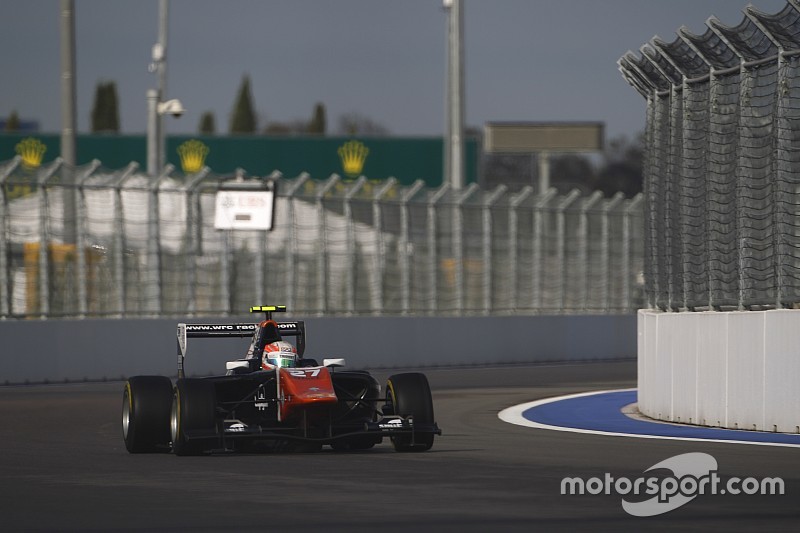 Luca Ghiotto denied polesitter Esteban Ocon to take his fourth win of the season and extend his points lead in a postponed first GP3 race at Sochi.

Closing the gap behind Ghiotto to 10 points in the standings, polesitter Ocon looked set to grab the points lead with his three title rivals starting outside the top five.

Ocon duly led off the line, but from sixth on the grid Ghiotto took advantage of the stalling cars of Matheo Tuscher and Kevin Ceccon to be all over Ocon in no time and pass him for the lead.

Following the Arden duo of Alex Bosak and Kevin Ceccon going off, the safety car neutralised the action before a potential counter-attack from Ocon.

Once the racing resumed, Ocon was unable to keep up despite being on the limit, even running wide once as Ghiotto recorded several fastest laps to build a safe lead.

In the end, Ocon managed to steal the extra two points with a time of 1m52.459s, allowing Ghiotto to stretch his advantage in the standings by only five points to 15.

Emil Bernstorff was another driver to make a great start to find himself running third during the safety car period, and he managed to keep Alex Palou at bay at the restart, the Spaniard posting his first top four finish of the season.

Dropping down to 11th at the start, Marvin Kirchhofer recovered two places to end up ninth, and is now, like Bernstorff, 53 points behind Ghiotto. Artur Janosz rounded out the top 10.