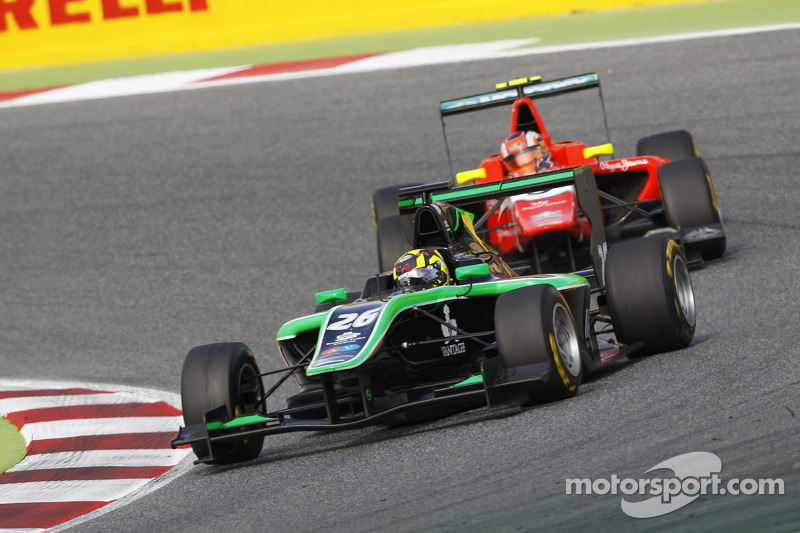 Series leader Alex Lynn has only started from pole so far this season.

GP3 heads to the British home of motorsport with Round 3 at the Silverstone circuit in the United Kingdom. British fans are known best for their passion, dedication and knowledge of the sport and will be following in the impressive footsteps of the Austrians after a fabulous Round 2 in Spielberg which had it all.

GP3 made its debut at the Red Bull Ring with the vast array of eager supporters and stunning scenery. Series leader Alex Lynn picked up where he left off by scoring pole position and another race one victory – this time leading home his Carlin teammate Emil Bernstorff.

Race 2 was even more of a thriller which saw Bernstorff claim his first GP3 win after an early dice for the lead turned sour when Luis Sa Silva and Mathéo Tuscher made contact. Lynn finished outside of the points after suffering a puncture mid-pack, whilst Koiranen GP’s Jimmy Eriksson pocketed podiums in both races to continue his championship chase.

The Silverstone race weekend marks a hectic schedule for the GP3 circus with three races in four weeks and will prove a pivotal point in the fight for supremacy. Lynn holds a 13 point advantage in the Drivers’ Standings over Eriksson, whilst Richie Stanaway (Status Grand Prix), Bernstorff and Marvin Kirchhöfer (ART Grand Prix) are all in the hunt. Pirelli have nominated the Hard tyre for this event.


“Silverstone is a very demanding event for tyres, and what often complicates the issue is changeable weather, which can lead to an extremely wide range of temperatures experienced over the course of a weekend. We’ve seen very heavy rain as well as bright sunshine in the past, so the teams have to be prepared for anything. As a result, the information gathered in one session sometimes isn’t especially relevant to the next session, as the temperature has changed. This is especially the case for GP3, which has some very early sessions as well as some quite late sessions. Tyre degradation will be among the highest we see all year, so looking after the tyres and making sure that they don’t overheat will be more important than ever. In GP3 the challenge is a different one: getting the best out of a limited tyre allocation in both races, without loss of performance.”

Nick Yelloly - Status Grand Prix: “Silverstone is my home circuit as I live very close to it, so I would say it’s my favourite circuit of the ones we go too. It’s a really high speed and flowing circuit, the Maggotts and Becketts complex is one of the most famous series of corners in the world. You can attack it a lot. It’s very good for overtaking and it favours the brave, especially in the wet. There are three big stops out of the fast corners where you can overtake and you also have Stowe which is a very fast right hander at the end of the Hangar Straight which is really good. Three or four years ago they revised Turn One, which aids the overtaking process in turns one and two which is just about flat in a GP3 car – it certainly was last year so we’ll see if we can do the same this season with slightly less downforce. From last year when we ran the hard tyre, the tyres were pretty good so we could push a lot. This year we have a step harder on the compound so we’ll see how they perform.”