Good final day for the Argentine driver in the GP3 collective tests at Silverstone. Facu Regalia finished second once again, both in morning and afternoon sessions.

Facu Regalia ended up in a very positive way the GP3 preseason test, the series celebrating its final test day yesterday at Silverstone. Argentina´s driver was first or second almost all day long, in the two practice sessions. 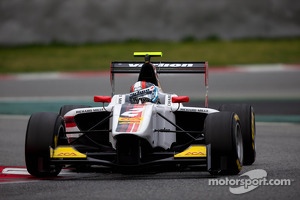 In the morning Regalia set a best lap of 1:45.855 and was the first driver under 1:46 mark ever in GP3, finishing second in the times standings.

Then, in second free practice session, Regalia had a very good pace again and posted a time of 1:46.194, a bit slower that in the morning. Regalia was the fastest ART Grand Prix driver on track, just like the previous day.

“I leave Silverstone quite happy with our results. Finishing both days second is a great result taking into account that it´s the last test previous to season debut in May.

It was a hard working day, and we tested many different things involving the set-up, with interesting conclusions at the end. We trained starts to arrive to Barcelona confident enough in this matter”, Regalia said.

The 21 years-old driver also explained that “we´ve more than a month until race one in Barcelona. It´s going to be a long time for me! Because of I´d like to start right now.

ART Grand Prix is very strong, and I´ve had an easy and quick adaptation to my engineer and technical director at the team. Anyway we have ahead the most difficult challenge: a complete season”.

Bamboo poised to finalise driver line up testing at Silverstone

Regalia will not race with Comtec at Aragon