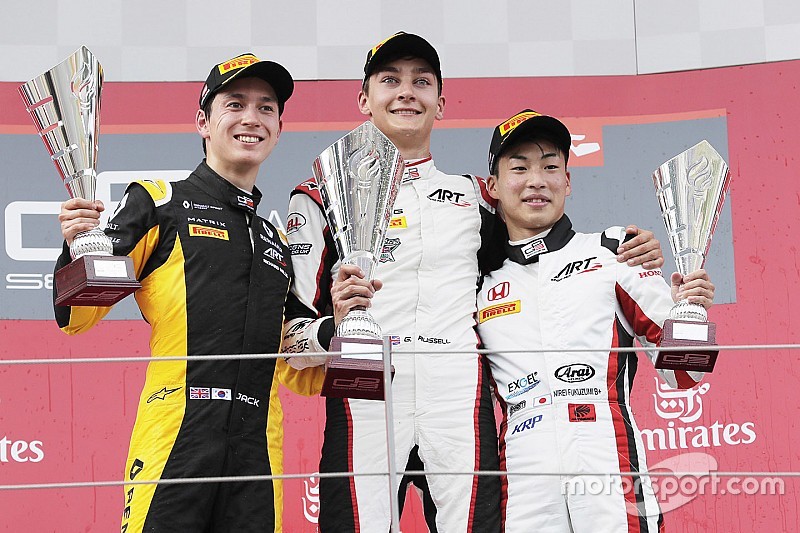 From pole, Russell held his advantage off the line - squeezing Aitken on the approach to Turn 1 in the process - while behind the leading two drama unfolded at the Turn 3 right-hander.

An overambitious lunge up the inside by another ART driver, Anthoine Hubert, effectively accounted for the races of Arden pair Steijn Schothorst and Leonardo Pulcini, as the Frenchman hit Pulcini's car, sending the Italian into Schothorst.

Pulcini was eliminated on the spot, while Schothorst stopped on track two laps later, but Hubert continued virtually undamaged in third place before being hit with a 10-second time penalty.

Nirei Fukuzumi in the fourth ART car had made his way up to seventh, and vaulted to fifth when the Virtual Safety Car period ended. He soon picked off Alesi to make it an all-ART top four.

Russell at this stage led Aitken by just under a second, and was able to stretch his advantage over the Renault protege over the remaining laps to seal his first GP3 win by 2.3 seconds.

Such was the advantage of the ART quartet that Hubert only dropped one position with his penalty, slipping to fourth place behind Fukuzumi.

Over 10 seconds behind, a fierce multi-car scrap played out for the remaining points positions, with Alesi being demoted by both Tveter and Boccolacci in the closing laps having held fifth for much of the distance.

Tveter went on to take fifth, but on the penultimate lap Boccolacci dropped several places, allowing Alesi back into sixth, Alessio Lorandi up to seventh and Raoul Hyman to eighth.

From 19th and last on the grid, DAMS driver Tatiana Calderon had climbed to the final points position by half-distance, and finished ninth on the road as Boccolacci dropped back.

But both the Colombian and teammate Bruno Baptista, who shadowed her for much of the race, were hit with five-second time penalties for overtaking under yellow flags.

That promoted Boccolacci back to ninth, ahead of Arjun Maini, with Calderon falling to 13th place.

DAMS lodged an appeal over the penalty to its two drivers, but this was rejected.

Santino Ferrucci in the remaining DAMS car was an early retirement, the American pulling into the pits just after completing only a handful of laps.

A miserable outing for Arden was completed by Red Bull junior Niko Kari being hit by Julien Falchero at the first corner and subsequently retiring in the second half of the race.