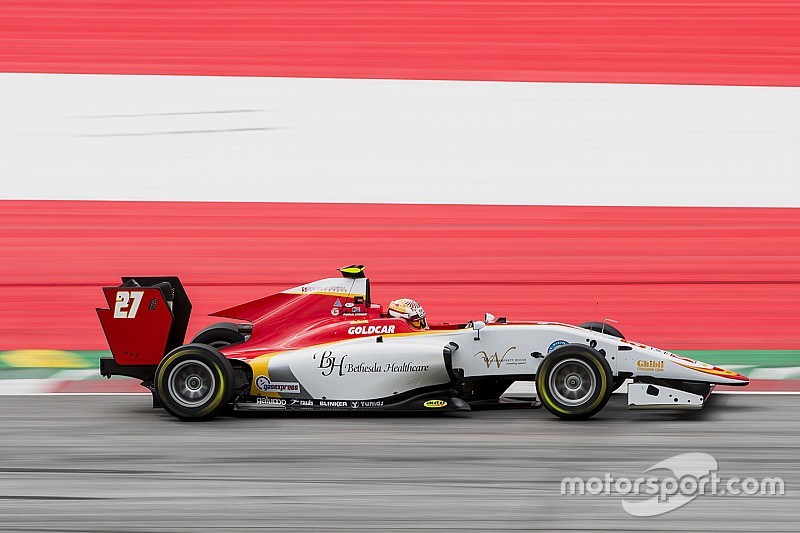 Campos Racing's Raoul Hyman took a lights-to-flag win in the GP3 sprint race at the Red Bull Ring, the South African rookie scoring his maiden win in the series.

As in the Barcelona season opener, Hyman finished eighth in Saturday's feature race, meaning he started the sprint race from pole.

However, while he only finished seventh in Spain, Hyman led every lap of the Red Bull Ring race to win by 0.9 seconds from Giuliano Alesi.

Ferrari junior Alesi passed the slow-starting Alessio Lorandi and, while he was never more than a second behind Hyman, he never drew close enough to make a serious overtaking attempt.

ART driver Nirei Fukuzumi passed Ryan Tveter for the final podium spot on the penultimate lap, although Tveter still claimed his best finish in GP3 so far with fourth.

Fukuzumi's teammates Jack Aitken and George Russell were fifth and sixth, as Anthoine Hubert brought the fourth ART car into the top seven.

The race ended on a dramatic note with Dorian Boccolacci hitting Lorandi while fighting for seventh, who dropped from second to eighth on the opening lap.

Running into the back of Lorandi's Jenzer at Schlossgold, Boccolacci went airborne and his car rolled twice before landing right-side-up in the gravel trap.

The Frenchman walked away from the accident, but was handed a three-place grid drop for the opening Silverstone race next weekend for causing it.

Lorandi made it home to secure the final point scoring position despite losing his rear wing in the crash.

DAMS driver Bruno Baptista was the first retirement after running wide at the penultimate turn, running over a kerb and picking up damage.