Ivan Taranov: "It was my first race weekend in GP3 Series and I had to learn a lot."

The newly-established GP3 Team of Hilmer Motorsport made its race debut in GP3 Series. With a preparation time of only seven weeks, the squad of Franz Hilmer competed last weekend in Barcelona. But not only was the team new in the junior series that is racing in front of the Formula One teams, also for its three drivers it was the first appearance in GP3 Series.

Prior to the race the team confirmed Ivan Taranov and Nelson Mason for the whole season. Beitske Visser joined the team for the event in Barcelona and was the first female driver at Hilmer Motorsport. Whilst Taranov and Mason had the opportunity to get to know the car during the pre-season test days in Spain in April, Visser could only do her first laps in a GP3 car in practice on Friday. 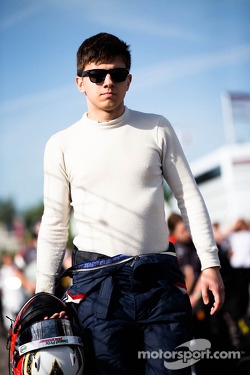 The 19-year-old Dutchwoman got more used to the car lap by lap and could keep the pace of her competitors with more GP3 experience. In both races, Visser could make up some places and in the fight for positions with for example Jan Mardenborough she has shown a strong performance and fighting spirit. Visser, the only female driver in the field apart from Carmen Jorda, finished the race on Saturday in 20th position and ended up in a strong 15th position on Sunday.

Nelson Mason a difficult start into the season and couldn’t show his real potential. In practice on Friday he had a puncture and ended up in the gravel 15 minutes before the end of the session. Luckily neither the driver nor the car had been seriously injured or damaged. After a penalty after qualifying, the Canadian had to start from 23rd position and climbed up to 17th place. After the rain in the night before the race on Sunday, the track was wet and slippery before the start of the second race. All drivers were on slick tyres and were sliding on the damp track.

Mason was victim of the difficult track conditions and was hit by another driver. His steering was damaged and so he had to retire. Nevertheless, Mason showed a good performance during the weekend and with a little bit of luck he could have finished the races in the Top 10. His team mate Ivan Taranov, who is also a rookie in GP3 Series, had to get used to the high level in the junior series and had to learn a lot. After a gearbox problem in qualifying on Saturday morning, he could only complete five laps. His mechanics managed to fix the car for the first race, which took place only a few hours later. The young Russian driver could participate in his first GP3 race and finished in 22nd position. In the second race on Sunday, Taranov had to serve a drive-through-penalty because a mechanic was working too long on his car before the race start. He lost a lot of time and only could finish in 20th place.

Franz Hilmer, Team Principal: “We knew that it would be difficult to compete in our first GP3 race with three rookies. We only had about seven weeks to prepare for the season and all things considered we are satisfied with the outcome. There are some things we have to improve as a team but also the drivers have to progress. We were very pleased to have Beitske Visser as the first female race driver at Hilmer Motorsport and we were impressed by her performance. She did her first laps in a GP3 car in practice on Friday and she was in front of her team mates. Also in the races she had a good pace and was able to keep up with her competitors, to fight with them for positions and to overtake them. Unfortunately, Nelson Mason was involved in a collision on Sunday and couldn’t finish the race. He was on a good run at that time and maybe he could have finished in the Top 8. We will now keep on working hart and use the break before the next event in Austria to keep on improving ourselves.”

Ivan Taranov, Driver #17: "It was my first race weekend in GP3 Series and I had to learn a lot. Together with the engineers was made some progress over the weekend in terms of the set-up of the car. With the data that my team mates and I gathered we could improve the cars and be quicker. I have also worked on my driving and was able to get closer to my more experienced team mates. In the races I was a bit unlucky, but if we continue to develop as we do now, in the next weekend we should have better results. Everything is new for me in this championship, and I work with my team mates and engineers to get used to everything quicker. We work together well and everyone in the team helps me a lot. I am also really grateful to my mechanics that have done a great job during the weekend.”

Nelson Mason, Driver #18: "I would really like to thank the team and my crew for this weekend. We were really struck by bad luck: a tyre failure early in practice and a tough qualifying where I didn't maximize the tyres. We had a strong first race on Saturday, passing our way up six spots to 17th, but our hard luck struck us again in the second race on Sunday. I know we will continue to get stronger and I cannot wait for Austria. I can't thank my family, my sponsors and Hilmer Motorsport enough for their support!”

Beitske Visser, Driver #19: “It was not an easy weekend, both for the team and me. The team was new and also I never drove the car before, but during the weekend we all made a lot of progression. I think in the end we had a good result this weekend given the fact that it was our first event in GP3. The qualifying didn't go very good because I got traffic in the last sector which put me on 24th position. In the first race my start was not very good and I lost some places, but during the race I could recover and finished in 19th. The second race was very difficult because we were with slick tyres on a wet track. But I managed to do well and came up to 15th position. I am satisfied with the progress we made this weekend. I want to thank everyone at Hilmer Motorsport and my sponsors for giving me the chance to do this race weekend in Barcelona.”

Trummer returns to GP2 with Hilmer