A podium finish in the latest round of the GP3 Series at the Nurburgring has moved British racing driver Jack Harvey up to fourth in the series standings. 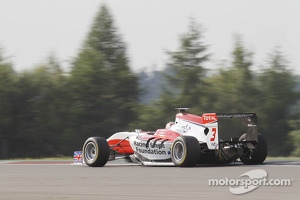 Following a brilliant race weekend in Silverstone last weekend where Harvey secured his first ever GP3 Series win, the Racing Steps Foundation-backed driver headed to the Nurburgring for the next round with high hopes of another strong result.

On Saturday morning, Harvey posted the fourth quickest lap time of the session; just three tenths behind the eventual pole sitter Regalia. The MSA Team UK driver lined up on the second row of the grid for the first race of the weekend on Saturday afternoon.

Making a strong start, Harvey was up to P3 straight off the line. However, never being more than one second behind second-placed driver, Ellinas, during the whole race, Harvey was stuck running in the dirty air of the Marussia Manor Racing driver’s car and was unable to find a way past. After fifteen laps of racing Harvey crossed the finish line in P3, taking a further 15 Championship points.

On Sunday morning, Harvey lined up in sixth position for the reverse grid race. Making a lightning start, Harvey was up to P3 in the first few corners, but was then tapped from the rear and dropped down the running order to P10. Harvey then spent the rest of the race stuck behind the Jenzer Motorsport car of Niederhauser and had to settle for tenth place when the chequered flag fell.

“We’ve had a mixed weekend of results. It was great to keep the momentum going from Silverstone with Saturday’s podium result but Sunday was a little disappointing as we were looking good for another podium finish;” commented Jack Harvey.

“Our overall qualifying and race pace is looking good though and the results from both Silverstone and the Nurburgring show this. We now look forward to the next two races at the Hungaroring at the end of July where the aim will once again be to get some more strong results and move further up the Series Standings;” continued Jack Harvey.

Bamboo wins at the Nurburgring