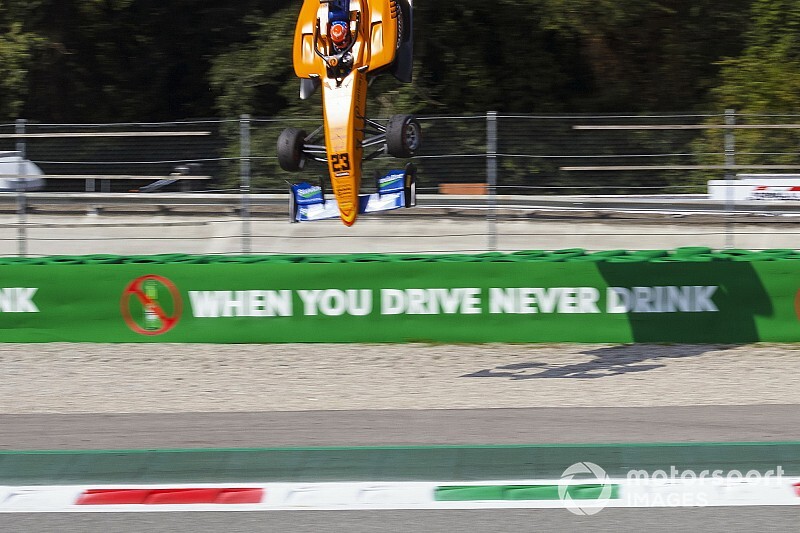 Alex Peroni has been released from hospital after his enormous airborne crash at Monza, but will miss the next FIA Formula 3 Championship round to recover from a broken vertebra.

Peroni, 19, hit a sausage kerb at the exit of the Parabolica and was launched into an airborne crash. He landed upside down on top of the tyre barrier, then the car righted itself.

Marshals at the scene escaped serious injury and Peroni walked to the nearby medical car.

However after displaying concussion-like symptoms, Peroni complained of back pain and was taken to San Gerardo hospital near Monza where he has been under observation since Sunday, September 8.

It was decided that he does not require surgery, but must rest completely while wearing a back brace for 30-days, which rules the Campos Racing driver out of the F3 season finale at Sochi on September 28/29.

Peroni’s manager David Quinn said: “In the accident Alex suffered concussion as well as a back injury when his car landed heavily after being launched high into the air by a trackside kerb.

"While Alex is in good spirits and keen to resume racing as soon as possible, the first priority is his full recovery which will necessarily take time.

“Therefore everyone, including Alex, needs to be patient.”

Peroni will begin the journey back to Tasmania – which can take 30 hours from Milan – today, and he and his management team are set to begin work on securing an F3 return in 2020 immediately.

He will seek further medical advice on arrival in Tasmania.

Peroni feels "very lucky to be walking" after Monza crash