Niederhauser signs off in style at season-finale 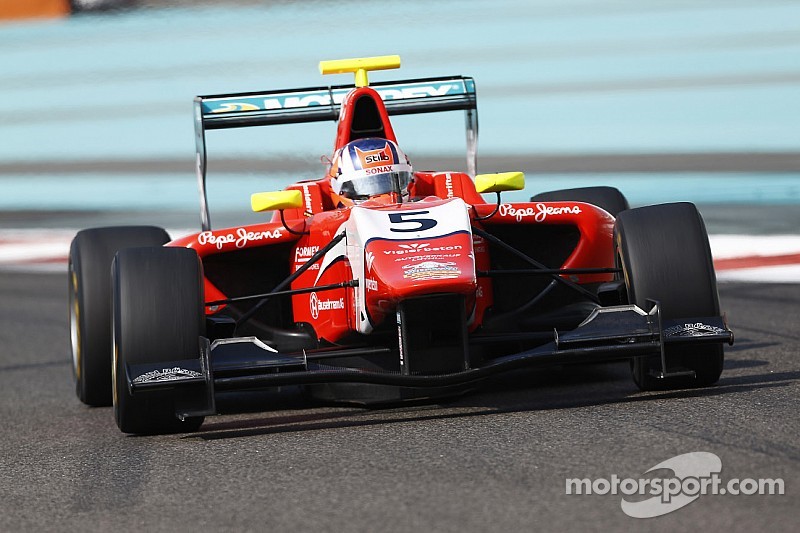 Swiss star Patric Niederhauser made the perfect getaway to snatch the lead from Nick Yelloly (Status Grand Prix) at the start of final race of the 2014 GP3 Series. The Arden Motorsport retained the lead despite a safety car early on to record his third win of the year. Newly crowned GP3 Champion Alex Lynn crossed the line in third as his team Carlin clinched the Teams’ Champions trophy after leading the standings from the opening round.

With so much still to play for…nerves were aplenty prior to the race. ART Grand Prix’s Marvin Kirchhöfer stalled on the pre-grid and had to start from the pitlane. Yelloly had reverse pole but when the lights went out it was Niederhauser who made the better jump and led into turn one. Lynn overtook his teammate Emil Bernstorff to move up to third, the British squad knowing they needed a strong result to hold onto their lead in the Teams’ Standings.

Contact was made on lap one between Dean Stoneman and Alex Fontana, the Swiss driver was able to continue but the Koiranen GP winner was forced to retire in the pitlane with a damaged rear wing. Ryan Cullen and Luis Sa Silva were involved in a separate incident, for which the Angolan born driver served a drive-through penalty, due to debris on the track; the safety car was deployed.

Once the action resumed, Niederhauser remained calm and in control and began to increase his advantage over Yelloly in second. Kirchhöfer was soon carving his way through the field, the German rookie eventually crossing the line in P12 after some brilliant overtakes. It was not to be enough to steal the runner-up spot in the Drivers’ Standings though; with Stoneman and Kirchhöfer both failing to pocket points, the Brit ends the season as Vice-Champion with the ART Grand Prix ace collecting the third placed driver’s trophy.

The battle was on for the final point on offer with Richie Stanaway making a successful manoeuvre on Jann Mardenborough, the Brit then fell into the clutches of his Arden Motorsport teammate Robert Visoiu, the two enjoying a fantastic wheel-to-wheel dice. Unfortunately for Mardenborough, he retired with three laps to go with a suspected puncture.

Niederhauser at the front was increasing the margin back to Yelloly and celebrated as he took the chequered flag, almost five seconds clear of the green and black machine. Lynn clocked his eighth podium of the season, in what has been an incredibly dominant and consistent season for the Red Bull Junior team rookie. Bernstorff, Dino Zamparelli, Kevin Ceccon, Jimmy Eriksson and Richie Stanaway completed the top eight.

Lynn, Stoneman and Kirchhöfer will claim their silverware for their top three in the Drivers’ Standings, whilst the Carlin team punched the air with joy after their win in the Teams’ Standings. ART Grand Prix who have won the elusive teams’ trophy for the past four consecutive seasons finished second, with Status Grand Prix claiming third.

The 2014 GP3 season may have come to an end but action resumes again in just a few days for a three day post-season test at Yas Marina on November 28-30.