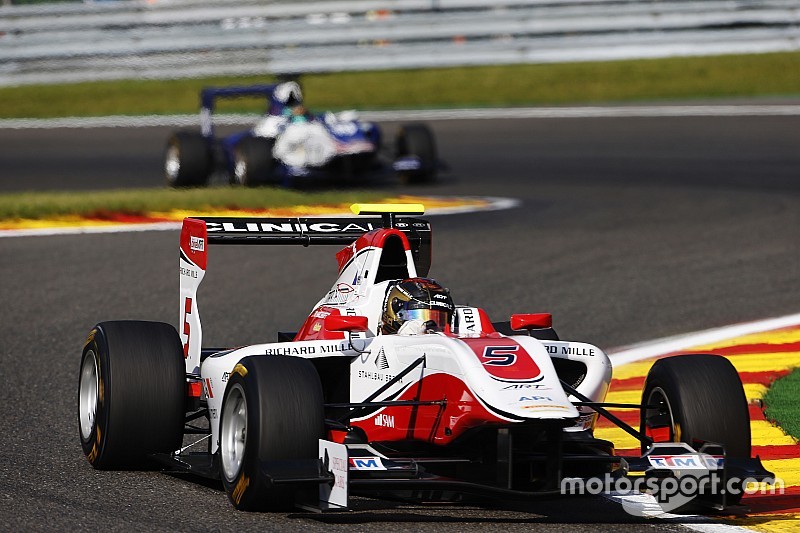 A thrilling GP3 Sprint race at Monza saw ART's Marvin Kirchhofer pick up a dramatic win after taking the race lead on the penultimate lap.

Koiranen GP's Jimmy Eriksson was all set for his first victory of the season after taking over the race lead on lap three from Status' Alex Fontana.

The Swede led every lap since then, until the penultimate lap, when he began to run out of fuel and dropped to fifth, giving German Kirchhofer his third win of the 2015 season.

The start of the race was aborted after Seb Morris stalled on the grid and joined Pal Varhaug and Artur Janosz for a pitlane start.

Reverse grid polesitter Alex Palou (Campos) had a scary spin on the way to the grid on the formation lap and finished 10th in the race thereon.

Esteban Ocon made it ART 1-2 after ftaking second ahead of charging championship leader Luca Ghiotto (Trident).

The Italian started 19th and made his way up to third after some fantastic overtakes, including an opportunistic move at Roggia when Fontana and Emil Bernstorff were battling for positions.

Having despatched Kevin Ceccon, Ghiotto was all over Ocon in the dying stages of the race but the French driver held his nerve in the end to claim his seventh consecutive runner-up finish.

Arden's Ceccon finished fourth ahead of Eriksson and was earlier in a battle for third with Ocon but didn't have the pace to fight the ART driver.

Earlier, Briton driver Bernstorff had a scary moment going through turn one and two when Fontana gave him no room which launched the Arden driver over the kerb, all four wheels above the ground and ended his race.

Fontana was handed a 10-second penalty for causing a collision.

DAMS and Virtuosi join 2016 grid as Carlin and Status exit