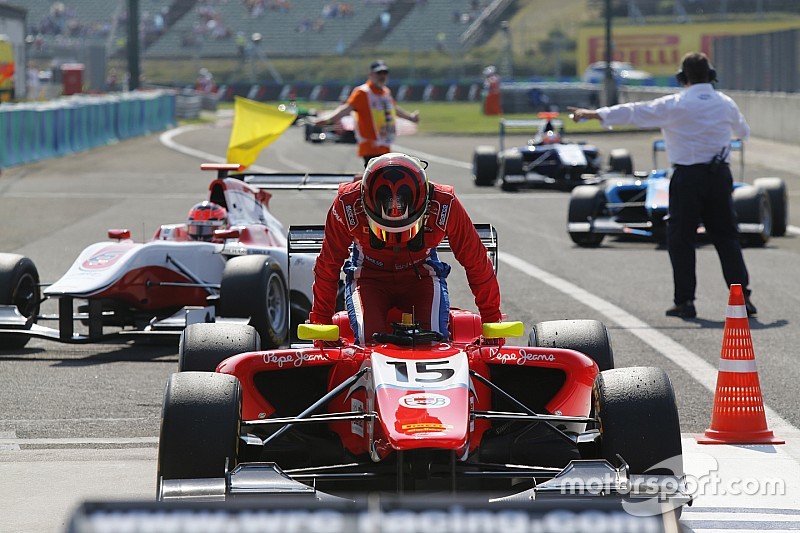 Emil Bernstorff repeated his GP3 Series victory from Spa-Francorchamps at Monza on Saturday, passing Esteban Ocon in the closing stages to win.

Ocon took a huge bite out of Luca Ghiotto’s GP3 Series points lead, however, as the Italian failed to make it off the startline from pole position.

Ghiotto is now just four points ahead of Ocon.

Kirchhofer attacked Ceccon for second at Roggia, both cars going over the kerbs and Kirchhofer flying through the air, but continuing. Parry scrabbled past them both as they straightlined the chicane.

Bernstorff passed Kirchhofer for fourth at Parabolica on lap two, but Kirchhofer got him back on the exit.

Parry closed right up to Ocon at the front by lap four, as Ceccon pulled away in third as Kirchhofer and Bernstorff battled over fourth. They swapped the position time and again, with Jimmy Eriksson getting involved, with Seb Morris and Matheo Tuscher (from 12th on the grid) in on the act too.

Bernstorff finally made a move stick on lap nine, although Kirchhofer didn’t seem too pleased after what had been a very fair fight between them in terms of giving racing room.

Tuscher passed Morris at Rettifilo for seventh on lap 16, only for the Welshman to crash into the back of him at Roggia seconds later.

Following some mid-race tedium, as drivers conserved their tyres, Bernstorff passed Arden teammate Ceccon at Roggia at half distance.

He then charged after Parry, and passed him with ease at Rettifilo with five laps remaining. Ceccon tried to pass Parry two laps later, but outbraked himself and straightlined Rettifilo.

At the front, Bernstorff caught Ocon with three laps remaining. His first attack ended with him running out of road at Rettifilo, and bouncing across the kerbs.

After regrouping, he grabbed the lead around the outside of Roggia on the penultimate lap to complete a fifth-to-first charge.

Ceccon also nabbed third place on the last lap, passing Parry at Roggia, although the Welshman almost got him back at the final corner.

Kirchhofer finished a distant fifth, ahead of Eriksson and Tuscher.

Monza GP3: Ghiotto storms to pole in a damp qualifying