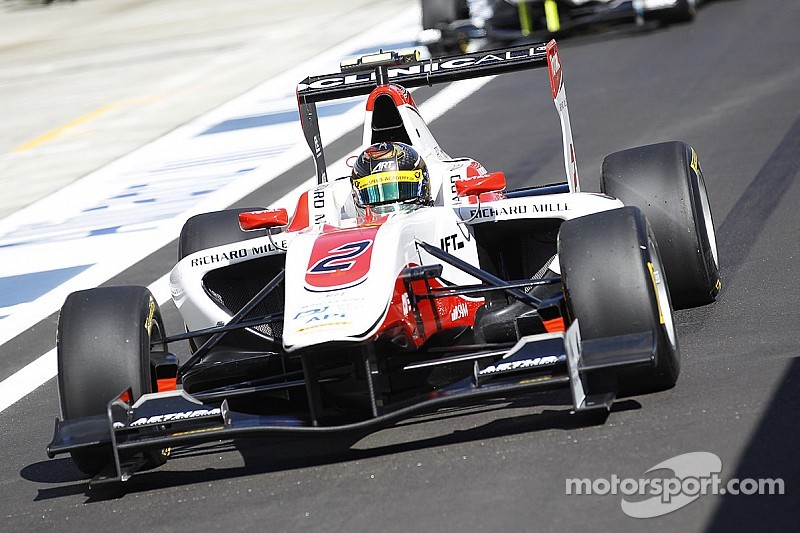 Success! A memorable qualifying session saw Marvin Kirchhofer blaze to pole, whilst Carlin and Red Bull Junior Team rookie Alex Lynn became the fifth driver to take the elusive GP3 crown. The Brit had one hand on the coveted trophy prior to the season finale at Yas Marina Circuit, after his nearest challenger in the standing’s Dean Stoneman failed to pocket pole and the four points on offer – Lynn can not be beaten on points and thus celebrates a fantastic season. Kirchhöfer, Stoneman and Emil Bernstorff completed the top three in an intense qualifying session.

A change in schedule saw qualifying take place on the same day as Free Practice. The thirty minute session got underway with a pleasant breeze for the most decisive session of the season. ART Grand Prix’s Kirchhöfer was first into the 1m56’s with Alex Fontana hot on his tails, but it was Stoneman: the man on a mission to secure pole and keep his title hopes alive who shot to P1.

The German continued his impressive pace to reclaim provisional pole by 0.067s, as the drivers returned to the pits – the calm before the storm…Lynn posted the fastest time of the session with five minutes left on the clock until his teammate Bernstorff bettered his laptime. Kirchhöfer was not to be denied though and blitzed to a laptime over half a second faster than the Carlin duo. Stoneman knew what he had to do and clocked the fastest first sector but was unable to improve on the remainder of the lap due to yellow flags and traffic.

One title may have been decided but the teams’ trophy is still up for grabs: Race 1 will commence at 12.05 tomorrow (GMT+4) – don’t miss the penultimate race of the 2014 season.