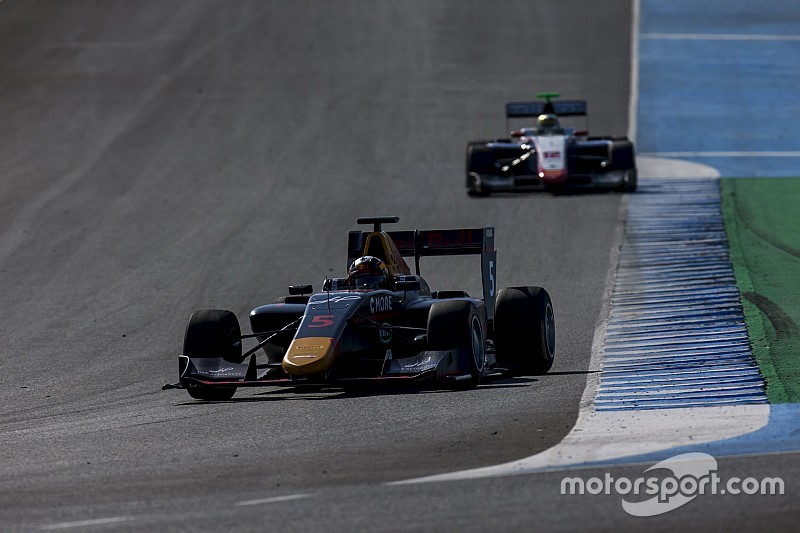 Arden International driver Niko Kari has lost his third place in the second GP3 race at Jerez after being penalised for his clash with fellow Red Bull junior Dan Ticktum.

The pair came together towards the end of the 17-lap sprint race as they fought over the final podium spot.

After they touched at the exit of the second corner on lap 14, Kari’s right-front wheel hit the left side of Ticktum’s DAMS-run car as they went through Turn 4, pitching the Briton into the gravel and out of the race.

After the race, which was won by Jenzer Motorsport’s Alessio Lorandi, the stewards investigated the incident and handed Kari a 10-second time penalty for causing the collision.

Due to a late safety car bunching up the field, the penalty dropped him to 19th and last overall.

Speaking in the post-race press conference, Kari, who is set to leave the Red Bull junior team at the end of this season, described the clash with Ticktum as a racing incident.

“I made a small mistake on Turn 1, [it was] close into Turn 2, [and] then I would say it’s a racing incident because I felt a bit pushed out on Turn 2 exit so there was not a lot of space for me,” he said.

“That’s my opinion – someone else might have their own opinions – that’s it.”

When asked by Motorsport.com if he could have left Ticktum more space, Kari replied: “Not really – I was just next to the gravel so I would say there was no space for me to go any wider or anything like this.”

Ticktum: "No respect" for Kari

Ticktum, who finished fourth in just his second GP3 start in yesterday’s first race, was incensed by the incident, saying he has "no respect" for Kari.

“He made a mistake at the chicane, at the last corner, and at Turn 1, so he’s going to have to prepare for a driver to overtake him and he didn’t,” Ticktum told Motorsport.com.

“I’m very unhappy about the move he did on me – it’s important to have respect for the people you’re racing against, but I don’t have any respect for that kid.

“I was fighting for third – I could possibly have got Dorian Boccolacci [who finished second] as well.

“I’m very upset because it’s nice to say ‘I’ve had a podium in my third GP3 race’ – but it hasn’t happened today for that reason.”

Nirei Fukuzumi is elevated to fifth ahead of Jack Aitken and Giuliano Alesi, while Tatiana Calderon now claiming the final point of the race in eighth place.

MP Motorsport to replace DAMS in GP3 in 2018