The Swede immediately settled into life with his new team Koiranen GP, featuring at the top of the time sheets.

Jimmy Eriksson enjoyed a strong start to preparations for the 2014 GP3 Series campaign by going fourth fastest in the opening test of the year at Estoril. 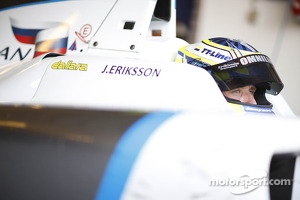 The Swede immediately settled into life with his new team Koiranen GP, featuring at the top of the time sheets throughout the two-day test at the Portuguese venue. Having gone second-fastest overall on Thursday – and topped the afternoon session by a comfortable six tenths of a second – Eriksson then underlined his pace by grabbing third as activities came to a close on Friday.

The overall times were headed by Carlin’s Alex Lynn (UK), with Eriksson spearheading the Koiranen GP assault to end up fourth on the combined list covering both days of running.

“A very positive test,” says Jimmy Eriksson. “I really enjoy working with the team, and the car felt good from the go. The mentality here really suits me, and the pace seems to be there as well. Testing is only testing, but the fact that we were able to run competitively in all sessions gives us every reason to be optimistic. There is still a lot of work to do, particularly when it comes to finding the right balance on the new front tyres we’re using this year. We also need to get rid of some excessive weight. All-in-all, though, a very promising start to the season and a solid basis on which to build going forwards.”

The next GP3 pre-season test takes place at Jerez in southern Spain on April 10-11. Racing then gets underway in Barcelona on 9-11 May.