Jimmy Eriksson will be a part of Koiranen GP team instead of Russian Time.

Jimmy Eriksson will not race for Russian Time during the 2014 GP3 Series campaign as originally planned, with the Swede instead forming part of a Nordic tie-up with Finnish outfit Koiranen GP in the Formula 1-supporting championship.

The change comes in the wake of extensive restructuring of the Russian Time squad following the death of former team principal Igor Mazepa, who passed away in February at the age of 40. The reshuffle – which included German single-seater operation Motopark Academy stepping down from its previous assignment to run the Russian Time franchise – rendered all driver contracts null and void, leaving Eriksson without a seat just months before the curtain-raiser in Barcelona. 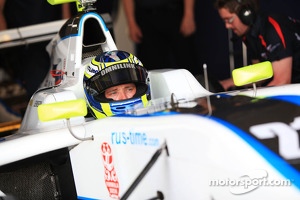 An agreement has now been reached with Koiranen GP, however, that will see 22-year-old Eriksson drive one of the team’s trio of GP3 cars throughout the up-coming campaign. Koiranen GP made an instant impression in the series upon arriving in 2013, taking a one-two finish on their maiden GP3 weekend before going on to claim third place overall in the teams’ standings.

“The last few weeks have been some of the most emotionally unsettling of my career, and I’m immensely thankful to Koiranen GP for their vital efforts to help get me onto the GP3 grid in a competitive car,” says Jimmy Eriksson. “From thinking everything was on-track for a strong season with Russian Time, to the tragic passing of Igor and a complete turnaround in everything we’d been working on over the winter, it has been an experience I’d now like to move on from. Besides enjoying a proven track record in other junior formulae, Koiranen GP did an extraordinary job during their maiden GP3 campaign last year, and I think the mentality of the team – Nordic as it is – will fit me well. Despite the poor timing, I’ve been fortunate enough to land one of the most competitive seats in the series, and I now intend to make the most of this new opportunity.”

Pre-season testing gets underway at Estoril, Portugal, on March 27-28. Two further tests are then scheduled to take place in Spain in April, with racing eventually kicking off in Barcelona on 9-11 May.

Koiranen quits GP3 ahead of 2017 season