Swede Jimmy Eriksson posted the best laptime on day two of testing in Spain with a 1.30.732 while Nick Yelloly (Status Grand Prix) clocked the best time of the afternoon session.

Grey clouds greeted the GP3 paddock at the Circuito de Jerez for the second day of pre-season testing. With cooler temperatures; drivers were eager to make the most of the early part of the session.

Carlin’s Emil Bernstorff was first onto the circuit and he was the early pace-setter ahead of Eriksson. The Koiranen GP driver then moved into P1 and was first to lap into the 1m30’s bracket before Alex Lynn joined him, lapping a tenth shy of the Swede – they remained the only two to record a 1m30’s lap in the session. 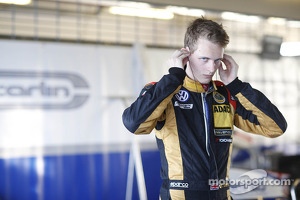 As the sun came out, the drivers all headed back onto the track in the final stages but there was a short stop when Victor Carbone (Trident) spun into the gravel which was covered by a red flag period. There was eleven minutes left on the clock when the session resumed and with warmer temperatures, the drivers were unable to improve on the best times set within the first hour.

Following the one hour break, Yelloly was the man to catch lapping in the 1m32’s. Urrutia had a small moment which meant his car paid a visit to the gravel trap and the session was red flagged. Jann Mardenborough and Visoiu held second and third with the Status GP duo of Richie Stanaway and newly announced Alfonso Celis Jr in fourth and fifth respectively at the midway point.

There was a brief interruption to the session when Pal Varhuag stopped on track and once the session re-commenced, the positions at the top remained unchanged until Bernstorff and Lynn swopped into second and third.

The standings at the end of the session were : Yelloly, Bernstorff, Lynn, Mardenborough, Visoiu, Adderly Fong, Stanaway, Patrick Kujala, Nelson Mason and Eriksson.

The third and final pre-season test session takes place next week at the Circuit de Catalunya on the 16-17 April 2014.

Nick Yelloly fastest on day one in Jerez