The penultimate round of the 2013 GP3 Series season takes place during the Italian Grand Prix at Monza on September 6-8.

Jimmy Eriksson continued to show signs of an up-turn in form as the GP3 Series reached Spa-Francorchamps in the Belgian Ardennes this weekend.

The Swede got the event underway with 17th place in the opening race on Saturday, in which his chances of a stronger result were dashed when he had to pit for repairs following an early collision. 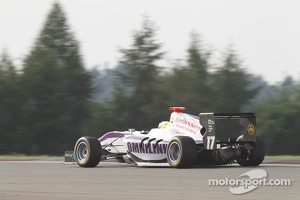 In Sunday’s concluding Race 2, however, Eriksson gave a firmer hint of his capabilities, as he produced a competitive drive to recover from 22nd after a messy opening lap to 15th by the chequered flag with the help of several committed overtaking manoeuvres.

While picking his way back up through the field, the Status Grand Prix GP3 rookie frequently lapped within just tenths of the leaders, and drew a line of delight under the Belgian round of the championship by going fastest of all on the very final tour.

Eriksson’s best effort in the race was good enough to place him ninth on the fastest lap charts, just over half a second shy of race winner Alexander Sims’ outright benchmark around the 7.004 km venue.

“Another step forward for us, and our pace in the second race is very promising for the final few rounds of the year,” says Jimmy Eriksson.

“If everything had gone according to plan this weekend, we would have been well-placed to challenge for points – as the lap times indicate – but, unfortunately, we once again struggled in qualifying. I encountered traffic on both my sets of new tyres, and the time I did was not representative of our performance.

Our long-run pace, however, shows what we can do, and the times we produced over the final half of Race 2 were in line with those set in the top five. Now, we just have to put all the pieces together over the concluding two rounds of the championship to make sure we both qualify and race well, and then we have every reason to be optimistic.”

The penultimate round of the 2013 GP3 Series season takes place during the Italian Grand Prix at Monza on September 6-8.