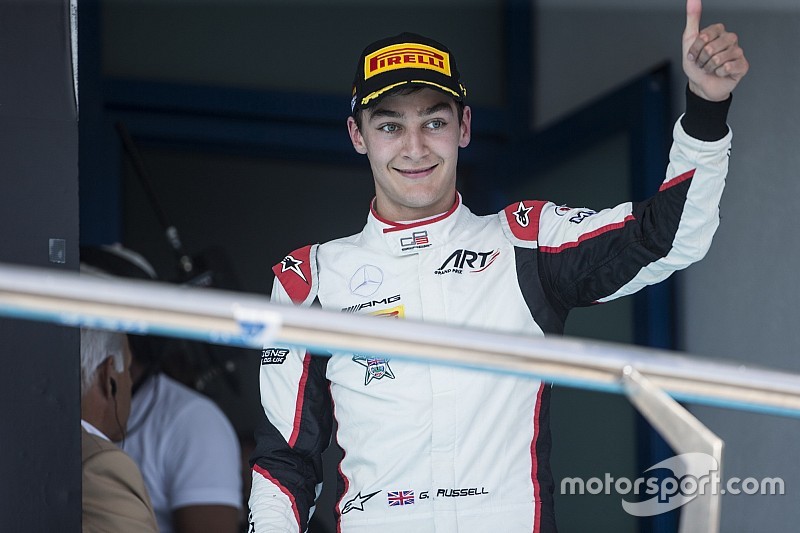 George Russell clinched the 2017 GP3 title by finishing fifth in a tense second race at Jerez that was won by Jenzer Motorsport’s Alessio Lorandi.

Lorandi led the reverse grid race from start-to-finish ahead of Dorian Boccolacci and Niko Kari, while Russell climbed from seventh on the grid to finish fifth.

The Mercedes Formula 1 junior driver also set the fastest lap and now has an unassailable lead over title rival and ART Grand Prix teammate Jack Aitken in the standings.

At the start, Lorandi held the lead off the line in front of Boccolacci and Kari, and the leaders charged into Turn 1 as they had lined up on the grid.

Just behind, Russell got alongside Aitken going through the first corner but the Renault F1 academy driver shut the door on the approach to Turn 2.

But Russell attacked Aitken again at the Turn 6 hairpin and moved up to sixth place, with his title rival also falling behind race one winner Nirei Fukuzumi as he ran wide.

The race settled down – after Hubert went off going onto the long back straight costing him momentum and allowing Dan Ticktum to take fourth – with Russell setting two fastest laps in succession during the early running.

Lorandi held the lead over Boccolacci by just under one second, and could not shake off the three cars behind him, with Hubert joining the end of the pack in the closing stages to make it a five-way fight.

After setting his fastest laps, Russell dropped back from Hubert and marshalled the gap to Fukuzumi and Aitken behind.

He came under pressure from Honda junior Fukuzumi approaching the halfway point of the 17-lap race, but looked to be managing the gap well.

But the race was shaken up by the intervention of the safety car, which was called into action following contact between Kari and Ticktum.

Red Bull junior Ticktum attacked Kari – also backed by the energy drink giant but only until the end of the season – at Turn 1 at the start of lap 14.

Kari defended hard but Ticktum dived down the inside of Turn 2 and they made slight contact at the exit.

They ran through Turns 3 and 4 side-by-side – with Hubert in close attention – but contact between Kari’s right-front and the left of Ticktum’s car pitched the Briton off the track and out of the race in the gravel.

The race resumed for one final lap, but Lorandi held firm to take his maiden GP3 win by 0.7s over Boccolacci.

Kari finished third despite the contact, with Hubert in fourth.

Russell survived a heavy attack by Fukuzumi at the start of the final lap to lead the Japanese driver and Aitken home in sixth and seventh.

Russell sealed the title with one round of the season to spare and has taken four wins on his way to the championship in his rookie GP3 campaign.