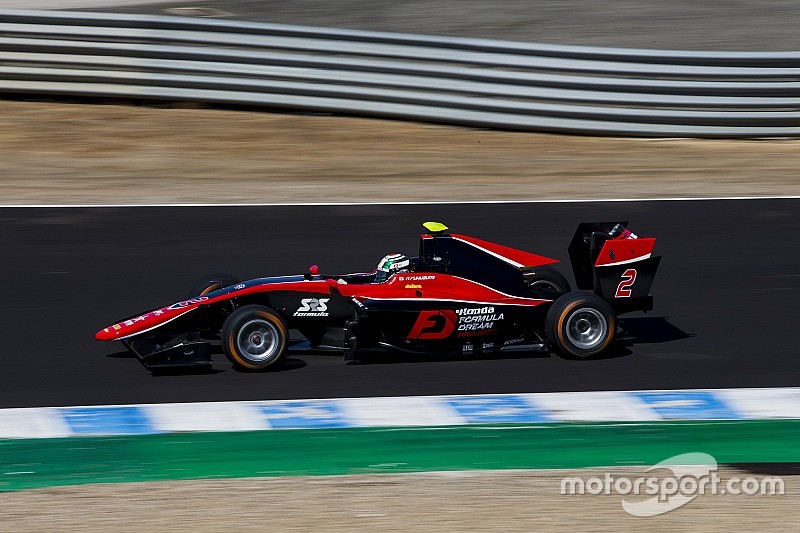 Mercedes Formula 1 junior Russell edged past Aitken, his closest challenger in the championship battle, on the first lap and won a tense scrap for second place.

At the start, Fukuzumi maintained his lead off the line while Russell made an immediate challenge to Aitken, who started second, at Turn 1.

Russell got alongside going through the sweeping right-hander and stayed there on the short run to the Turn 2 hairpin, muscling his way by to seize second place.

That scrap allowed Fukuzumi to pull clear of the one-second DRS detection margin and he set about consolidating his advantage with a string of fastest laps in the early stages.

He eventually extended his lead to two seconds and while it fluctuated over the course of the 23-lap event, the Honda junior secured his second win of the season – his first since the Barcelona opener – by 1.5s.

Russell extended his championship win to 46 points over Aitken with second, as he led home the three-way fight for the remaining podium places.

As he was adrift of Fukuzumi’s DRS range, Russell could not use the overtaking aid to catch the leader or defend from Aitken behind.

Ticktum pressured Renault Academy member Aitken hard throughout the race – getting to within 0.4s around the halfway mark and again in the closing stages – but did not make a move.

Anthoine Hubert, who at one stage closed in on the fight for second place, eventually finished 2.6s behind Ticktum in fifth.

Sixth went to Arden International’s Niko Kari, who got by Dorian Boccolacci on the opening lap, and the pair held station to the finish.

Alessio Lorandi – demoted from sixth to ninth on the grid after being found guilty of impeding Leonardo Pulcini in qualifying – looked to have eighth place and reverse grid pole for race two secured.

But Trident’s Giuliano Alesi, who had been pressuring the Jenzer Motorsport driver throughout the race, moved into eighth on the final lap.

The pair appeared to make contact twice on the long straight approaching Turn 6, but Alesi held the inside line to seal the move.

Julien Falchero rounded out the top 10 ahead of Steijn Schothorst, Ryan Tveter, Tatiana Calderon and Pulcini.

Kevin Jorg, who skated across the gravel on the outside of Turn 5 after locking up on the approach to the long right-hander on the opening lap, recovered to the pits – spewing stones from his sidepods as he did so – and eventually brought up the rear of the field.

UPDATE: Alesi was put behind Lorandi as a penalty for the contact between the two, thus giving the Italian eighth place and reverse-grid pole position.