Hungaroring is the next challenge for the GP3 series 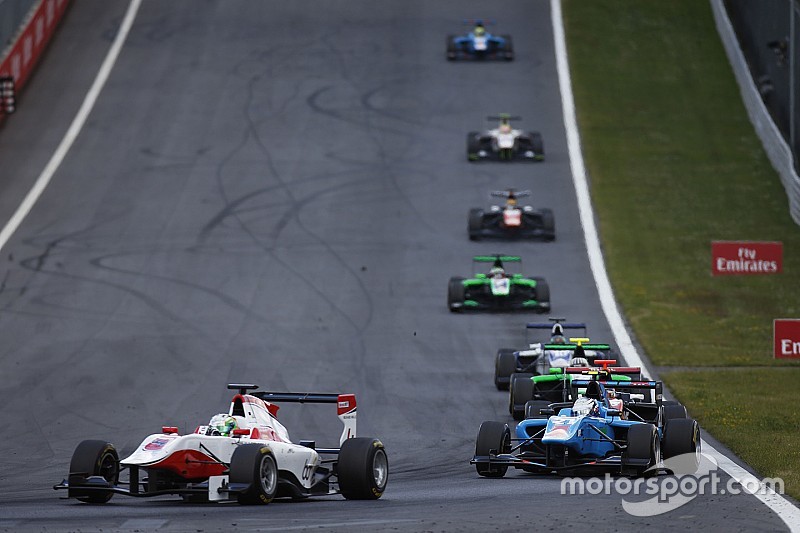 As the season approaches the midway point, the title race is well and truly on in a hotly contested Series.

The GP3 Series returns to track action this weekend for the fourth round of the season. The tight and twisty Hungaroring in Budapest is the next challenge for the grid of talented youngsters.

Marvin Kirchhöfer (ART Grand Prix) topped proceedings in Silverstone after blazing to pole and holding onto a fine victory despite severe pressure from Arden International’s Emil Bernstorff in the latter stages. Sunday saw Kevin Ceccon record his maiden win in the category ahead of Esteban Ocon.

Series leader Luca Ghiotto scored sixteen points in Silverstone, which resulted in his lead in the Drivers’ Standings being cut to five points by his nearest rival Kirchhöfer. Round 3 was the first time the Italian from Trident failed to start from pole but despite a trickier race, Ghiotto made sure he achieved the two bonus points for fastest lap to help in his quest for the coveted GP3 title.

The top three in the standings all have three podiums to their name this campaign (Ghiotto, Kirchhöfer and Ocon). But it’s Kirchhöfer who’s the first driver to clock more than one victory this season. As the season approaches the midway point, the title race is well and truly on in a hotly contested Series.

Very hot temperatures are expected for Budapest this weekend with the Hard Pirelli compound nominated. The 4.381 km Hungaroring is always a challenge for the drivers with fast corners, very few straights and with a large focus on tyre management.

“There is little rest for the tyres at Hungaroring apart from the pit straight, meaning the tyres are constantly working hard from corner to corner and operating at the top of their working range. As a result, we have selected the hard for GP3, in order to find the right balance between performance and durability. The drivers will also need to have a significant input in managing their tyres, to have the performance to take advantage of any overtaking opportunities that arise towards the end of the races in particular. The weather is going to play a big part and we are expecting high temperatures, which obviously have an effect on thermal degradation. Hungaroring is not easy to overtake on. With the move to a longer race on Saturday, the GP3 drivers benefit from the hard compound this year: however, this is still roughly equivalent to last year’s medium as all the GP3 compounds have become softer in 2015.”

“It’s a track where you have to contend with high temperatures. I think the drivers who are not used to such hot conditions may struggle. The heat obviously has a big impact on the tyres so I would expect a lot of degradation at the Hungaroring. Tyre management will be key. It’s a track with hardly any straights. You spend most of your time negotiating the twisty turns which means it’s very tough physically on yourself and not just the tyres. It’s also mentally tough as you have no break with such few straights. “My favourite part of the circuit is Turn 4, the uphill left. That is a fast corner, and I really like that challenge. I have some good memories of this track as it’s one of the first I raced on when I came over to Europe.”

• Samin Gómez returns to racing this weekend in Budapest in the #25 Campos Racing car. Christopher Höher had replaced the Venezuelan for one round in Silverstone.

• Trident will field two cars only this weekend with #26 Artur Janosz and #27 Luca Ghiotto.

• Jenzer Motorsport’s Ralph Boschung became the youngest driver to achieve a GP3 podium on Sunday in Silverstone at the age of 17 years, 9 months and 12 days. He beats the previous record set by Rio Haryanto in 2010 (age: 18 years, 1 month and 17 days.)

• ART Grand Prix leads the way in the Teams’ Standings on 142 points. In second is Trident on 101 with Arden International on 96 points.