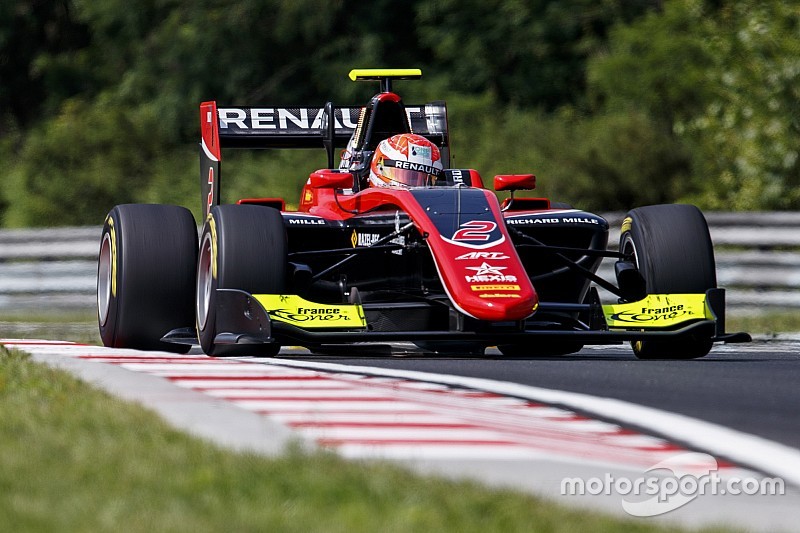 Anthoine Hubert increased his GP3 points lead to 10 points by topping Hungaroring qualifying, which was interrupted by Niko Kari crashing into Nikita Mazepin.

The session was red-flagged less than five minutes after it started when Kari ran wide at Turn 4, and smashed into Mazepin as he rejoined the track.

The Finn broke the right-rear suspension of his MP Motorsport car, which was left stationary on track.

Mazepin however was able to continue after the qualifying was restarted, and even led the way after the first set of flyers, 0.042s ahead of teammate Jake Hughes.

A lengthy mid-session lull followed before the field rejoined for the final five minutes, and Mazepin's best time was quickly beaten by Callum Ilott, the Ferrari junior going half a second quicker.

The Briton stayed first for only a handful of seconds before Hubert lowered the benchmark by further three tenths with a 1m31.409s, the Frenchman taking his second consecutive pole in GP3.

Mazepin improved to second after the chequered flag fell and eventually only missed out on pole by 0.075s.

Campos' Leonardo Pulcini and Hughes will share the second row as Ilott dropped down to fifth.

The German beat Dorian Boccolacci by half a tenth for seventh, as the top 10 was completed by Arden's Joey Mawson and Jenzer's Juan Manuel Correa.

Jannes Fittje, who took Beckmann's spot at Jenzer, completed his maiden GP3 qualifying 17th, only beating Julien Falchero and Kari, who did not return after his early crash.

MP driver Devlin DeFrancesco withdrew from the round due to illness.