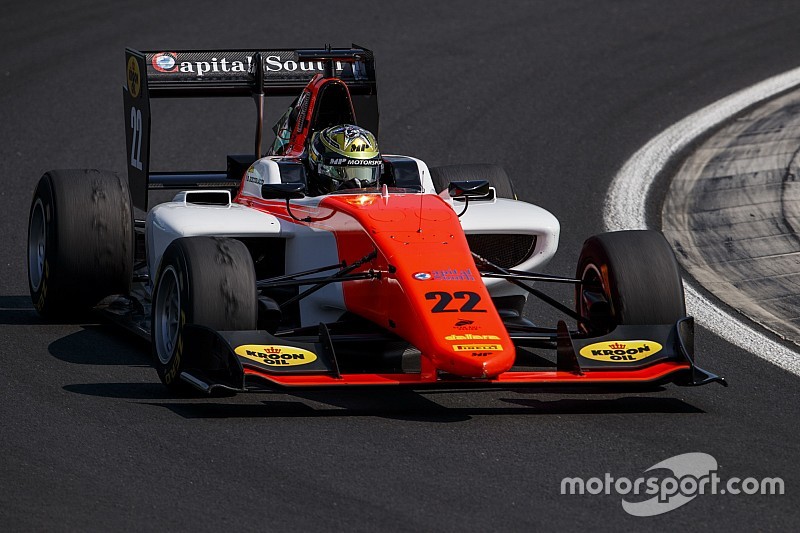 Dorian Boccolacci scored a lights-to-flag win in the GP3 sprint race at the Hungaroring, taking MP's first win in the series.

Pole-sitter Boccolacci had both Juan Manuel Correa and Callum Ilott side-by-side with him at the start but the Frenchman held the inside line into Turn 1, and his lead was never in danger after that.

Ilott was on the outside and ran through the escape road, rejoining ahead of Correa in second place.

However, the Briton was unable to keep up with Boccolacci, who had consistently better pace for most of the race - his lead was up to six seconds at one point, and a late charge from Ilott was only enough to close the gap to 2.3.

Leonardo Pulcini then moved past Correa on the outside of Turn 2 for fourth, leaving the Jenzer driver to defend from his former teammate David Beckmann, who switched to Trident ahead of the Hungary round.

The closest Beckmann got to demoting Correa was an ambitious move into Turn 1, which ended with small contact with Correa's right rear tyre, but no puncture.

However, Beckmann then had to turn his attention to Ryan Tveter, the American successfully passing the German on the penultimate lap for top Trident honours.

Tatiana Calderon spent most of the race behind Diego Menchaca before she passed the Mexican to score her first point of the season.

Menchaca was then also overtaken by Pedro Piquet and ended up 10th.

Race 1 winner Nikita Mazepin was only 10th after the start and lost further two places to end up 12th, two positions ahead of the last ART of Jake Hughes.

Niko Kari was the only driver to retire after ending up in the wall at Turn 11 following contact with debutant Jannes Fittje on the opening lap.