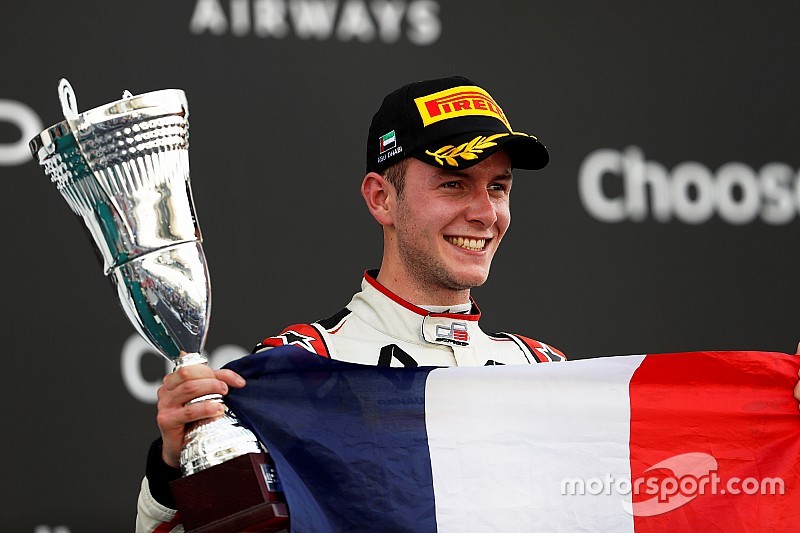 Anthoine Hubert became the last champion in GP3 history by finishing the first race of the Abu Dhabi finale in third, as Leonardo Pulcini scored the race win.

Hubert started and ended the race in third, a result that would have only not been enough to wrap up the title a race early if polesitter and ART teammate Nikita Mazepin was able to win.

The Russian was fighting for the lead with Pulcini early on as the Campos driver made a move at Turn 8 on the opening lap and Mazepin fighting back when DRS was enabled on lap 3.

However, Mazepin ran off-track at Turn 17 on the very next lap, and a subsequent passing attempt with the help of DRS resulted in him cutting the Turn 11-12-13 chicane.

Mazepin was then given a 10-second time penalty for not rejoining the track in the manner the drivers were instructed to prior to the race, effectively ending his title hopes.

Pulcini was able to pull away and cruise to victory with a gap of 8.6s after Mazepin's penalty was applied.

Hubert, spending the race on his own, was set to secure second but came under threat from a charging David Beckmann on the last lap and the German stole the spot at Turn 11.

Trident driver Beckmann had to fight his way through ART's Callum Ilott and Jake Hughes before he could start catching up with Hubert.

Ilott eventually took fourth with Hughes dramatically losing performance in the final few laps and, with Mazepin classified fifth and Giuliano Alesi also passing him, the Briton had to settle for seventh.

All drivers finished the race, but Arden's Joey Mawson was 20th and last after pitting for a new front wing.