Harvey victorious in Race 2 in Monza 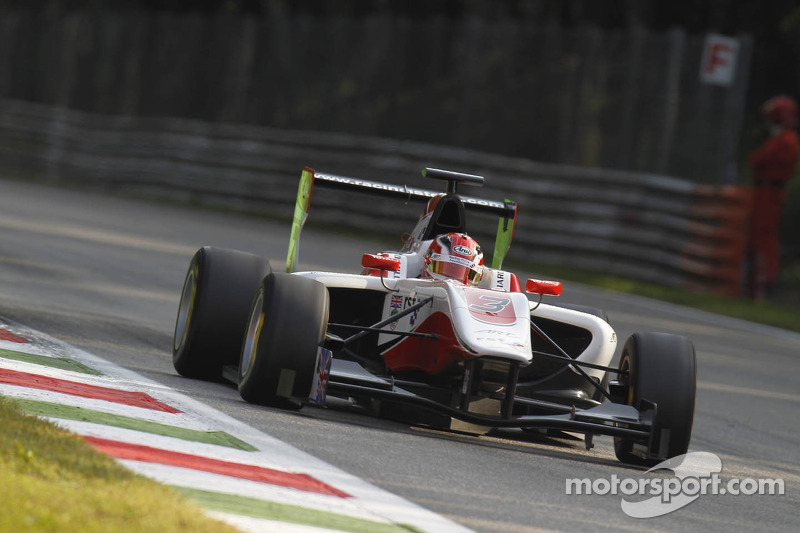 British star Jack Harvey romped home to victory at the Autodromo Nazionale Monza after making a great start from P2 and held off the challenge of MW Arden’s Daniil Kvyat and Bamboo Engineering’s Lewis Williamson in an action-packed Race 2. The GP3 title fight is going too the wire after the gap between the top two has closed dramatically, with many other drivers still in contention.

It all happened at the start and it was Jenzer Motorsport’s Patric Niederhauser who had reverse pole. The Swiss driver crept forward just before the lights went out and unfortunately stalled on the grid. His teammate Alex Fontana ran into the back of him, which thus put them both out of the race.

Harvey got away well into the lead as Carlin’s Alexander Sims got past Kevin Korjus (Koiranen GP) down the straight. Marussia Manor Racing’s Ryan Cullen made contact with several drivers heading into turn 1 including Trident’s Giovanni Venturini which brought a premature halt to their race. The safety car was deployed whilst the cars were removed.

Once the action resumed, there was passing aplenty and first on the move was Sims – making a successful pass on Korjus with GP3 Series leader Facu Regalia also on the prowl. Williamson was also quick at the restart and demoted Sims down a position, before Race 1 winner Daniil Kvyat made a very brave move to overtake Sims on the outside of Turn 4 to help his title challenge.

In the meantime Harvey led Williamson by less than a second, but his ART Grand Prix teammate Regalia had other ideas and passed the Scotsman for P2 at the midway point. Conor Daly who started P23 was busy carving his way through the pack, eager to bag points after bad luck yesterday.

All eyes were on the mouth-watering battle between Korjus and Kvyat in the first half of the race, the two diced wheel to wheel in spectacular fashion, but the Russian driver moved ahead and set his sights on his championship rival Regalia. On lap 12, Kvyat made his point and passed the Argentine, closing the gap in the Drivers’ Standings.

Williamson had pushed hard and began to suffer tyre degradation in the final laps and Kvyat made seized the moment and moved into P2. The MW Arden driver began to hunt down Harvey but the Brit held on to take his second win of his rookie season in jubilant fashion.

Harvey crossed the line just nine tenths ahead of Kvyat in an enthralling race, with Williamson holding on to enjoy his first rostrum of the season. Regalia finished P4, ahead of Korjus, Sims, Melville Mckee (Bamboo Engineering) and Daly. The American driver posted the fastest lap of the race, bouncing back from yesterday’s disappointment to sneak the final point, passing Sainz on the final lap.

Regalia’s advantage in the Drivers’ Standings has been cut to seven points with Kvyat inching closer. Korjus and Daly are next up on 107 and 104 respectively with Harvey moving up to fifth with 96 points.

ART Grand Prix hold the huge lead in the Teams’ Standings on a total of 338 points, with MW Arden and Koiranen GP on 240 and 183.

With only one round remaining, all eyes will be on the spectacular setting of the Yas Marina circuit in Abu Dhabi – the sparkling venue for the season finale of GP3. A champion will be crowned but who will it be…? Find out in Round 8 on 01-03 November 2013.

Kvyat blazes to victory in Monza

Daly taken out in first corner crash at Monza