GP3 Series™ is back for its fifth season and what a year this promises to be. The 2014 GP3 campaign will host two new venues with Spielberg (Austria) and Sochi (Russia) – along with the longest calendar in the Series’ history – with a total of nine rounds.

All eyes are focused on the emerging talent from the GP3 category following the superb performances of reigning Champion Daniil Kvyat in his rookie season in Formula 1™ with Scuderia Toro Rosso. Again, the Series has delivered in producing another very competitive field with a spectacular blend of experienced GP3 drivers along with eager debutants. Eight GP3 graduates will be racing in GP2 Series™ for 2014. 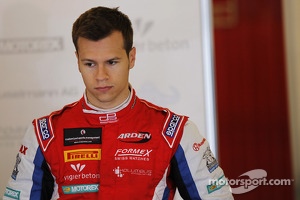 Nine teams compete in GP3, with new faces Hilmer Motorsport joining the fold. The German squad made a sterling impression in our big sister Series GP2 in their maiden year and will be looking to repeat that success with GP3.

There is one brand new face to GP3 proceedings with a second female driver in the field following the pre-season testing, Beitske Visser will race for Hilmer Motorsport and make her debut in a GP3 car in Friday’s Free Practice.

There has been a few minor technical changes to the second generation GP3 car to further enhance the show for 2014. Firstly the front tyre dimension has been increased by 20mm in width to bring the mechanic grip/balance forward. Secondly the aerodynamic configuration has been changed to make it even easier to follow another car in the tow to further increase over-taking.

Pirelli's Racing Manager Mario Isola commented: “Once more, there is a very promising field of young drivers in GP3 this year, with some exciting rookies joining the established contenders. We’ve made one important change to the GP3 tyres, with a new and larger tyre size at the front. This is intended to improve front-end grip and encourage oversteer, giving the GP3 car characteristics that are more challenging to drive.

”The structure of the front tyre has also changed, to accommodate the larger size, while the compounds are all a step harder this year. Coming straight off the back of a two-day test in Barcelona, the GP3 drivers should be familiar with our hard tyre, which is well-suited to the heavy demands of Montmelo.”

“I only have positive things to say about the Barcelona track, I would say it is one of my favourites to drive. For me this place is a bit special as this is where my love of motorsport started when I was eight years old to watch my first Formula 1 race, then ten years later I was racing at the circuit.

This track has everything it needs – it has a very long front straight which is good for overtaking, fast corners like corner 3, difficult corners like corner 9 where it’s really bumpy and you don’t see the exit so you really have to hang on. The last sector is more technical and slower and you need really good grip from the car.

This track is really hard on tyres so it will be a big challenge for us. Last year there was a big drop-off for the tyres but I expect it to be less this weekend with the hard compound. I think there will be good racing here.”

Sochi Autodrom: The penultimate round of the season