GP3 is back into action in Valencia

This weekend’s event in Valencia is run over two days instead of the traditional three. Free Practice and Qualifying are run on Saturday with fans treated to two races on Sunday.

GP3 swings back into action this weekend at the 4.005km Circuit Ricardo Tormo in Valencia for Round 2 of the 2013 Series. This will be a standalone event with GP3 the main focus of the weekend. The forecast shows for very hot and sunny conditions and it promises to be a lively encounter with a full grid of 27 drivers fighting for supremacy.

The season got underway in Barcelona last month with the second generation car making its eagerly anticipated debut with an extra 120 horsepower and laptimes almost five seconds quicker.

Tio Ellinas continued his excellent form from the end of 2012 and pocketed pole position for Marussia Manor Racing. The Cypriot stormed to victory in the opening race, collecting points for fastest lap too. Jenzer Motorsport’s Patric Niederhauser and ART Grand Prix’s Conor Daly joined him on the rostrum. 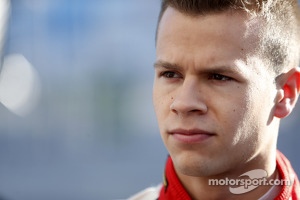 Race 2 was dominated by newcomers to the Series, Koiranen GP. Rookie Kevin Korjus started from reverse pole but it was his teammate Aaro Vainio who was victorious, delivering a one-two result in the squad’s maiden weekend.

Tio Ellinas leads the Series by 11 points over Niederhauser and 14 points over Vainio. Koiranen GP holds the early advantage in the Team Standings from Marussia Manor Racing and ART Grand Prix.

This weekend’s event in Valencia is run over two days instead of the traditional three. Free Practice and Qualifying are run on Saturday with fans treated to two races on Sunday.

The circuit is one of the few that runs in anti-clockwise direction and was used as the mid-season test venue for GP3 last season. Carlos Sainz (MW Arden) and Carmen Jordá (Bamboo Engineering) will fly the flag for Spain.

Pirelli have nominated the Medium tyre for Round 2.

Valencia next stop for Daly