Italian racer David Fumanelli posted the fastest time of the Silverstone two-day test with a 1:45.213 set in the morning session. This was a very impressive lap as it was a mammoth 4.9 seconds quicker than the GP3 lap record set in Silverstone last year, again showing the performance and speed of the new GP3/13 car and providing a very positive conclusion to pre-season testing. Tio Ellinas (Marussia Manor Racing) was quickest in the afternoon session.

It was another bitterly cold day at the Northamptonshire circuit as the drivers braved the conditions for the final day of testing in temperatures of just two degrees. The MW Arden duo of Robert Visoiu and Carlos Sainz Jnr, along with ART Grand Prix drivers’ Jack Harvey and Facu Regalia were first to set competitive lap-times. Spaniard Sainz Jnr broke into the 1m46s barrier early on with a half a second advantage over Fumanelli.

There was a short halt in proceedings when Bamboo Engineering’s Carmen Jorda spun, once the action resumed, Koiranen GP’s Aaro Vainio made his way to the top of the timings. Adderly Fong (Status Grand Prix) stopped on track which brought the second red flag of the day. Marussia Manor Racing’s Dino Zamparelli flew to P1 with the quickest time of the two-day test at that point before Regalia demoted the Brit’ to P2 and became the first driver to dip into the 1m45s, 3 tenths faster.

With one hour left on the clock, all eyes were on Fumanelli as he posted a stunning laptime to go 6 tenths clear of the Argentine. Alex Fontana (Jenzer Motorsport) and Sainz Jnr rose to P3 and P4 whilst there was a third red flag with a second spin for Jorda in the final moments of the session. 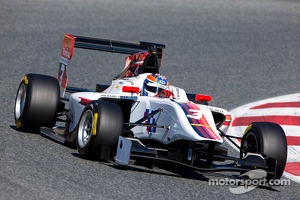 Most drivers in the afternoon session concentrated on long runs in preparation for the upcoming races. Koiranen GP’s Kevin Korjus was first to go P1 until Jack Harvey (ART Grand Prix) and Ellinas shot to the top of timesheets at the midway point. With just over one hour remaining, Regalia went fastest until Ellinas reclaimed back his position at the head of the timings.

Jenzer Motorsport’s Samin Gomez did not participate in the test today due to illness.

The opening round of the 2013 season gets underway at the Circuit de Catalunya, Barcelona on 11-13 May and it promises to be a thrilling season with the introduction of the second generation car.