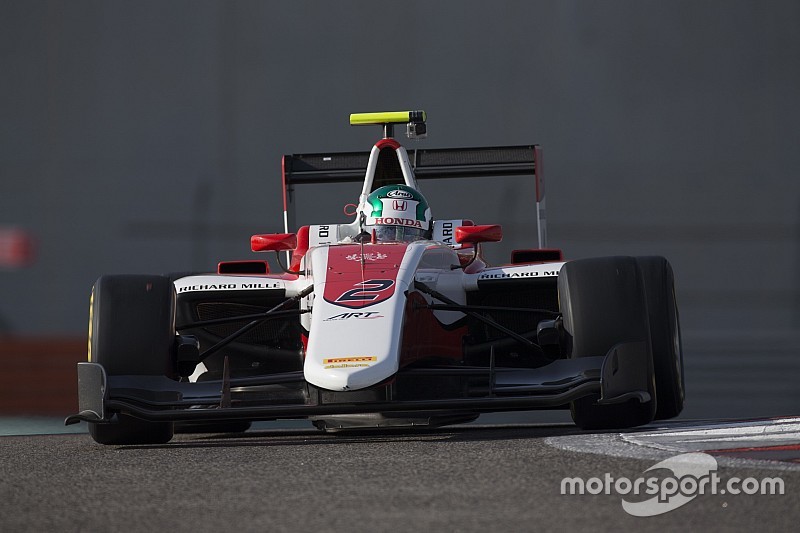 Honda protege Nirei Fukuzumi was quickest in both the morning and afternoon sessions of the first GP3 test day in Abu Dhabi.

While he was quickest by half a second in the first session, Fukuzumi recorded the best time of the day, a 1m55.479s, in the subsequent afternoon running.

Jack Aitken, who spent the season with Arden but switched to ART for the first two days of the test, was second on both occasions.

George Russell completed an ART 1-2-3 in the overall classification, going just two hundredths slower than Aitken in the afternoon.

Trident's Arjun Maini was best of the rest in fourth ahead of Santino Ferrucci, who is set to stay in GP3 for another year, and F3 convert Alessio Lorandi.

Former BRDC F4 title contender Raoul Hyman, who only took part in one European F3 and British F3 round each this year, was seventh.

Ferrari's Giuliano Alesi, who will stay with Trident in GP3 in 2017, was more than a second off the pace in eighth.

Maini will switch to ART with Fukuzumi and Russell both missing the day.

Ferrucci and Matheus Leist, 15th quickest today with Arden, will drive for Trident while Schothorst will move to the aforementioned British team.

Tarun Reddy will replace Hyman at DAMS, the latter filling in for the Indian at Koiranen.

Jenzer and Campos have not changed their lineups.