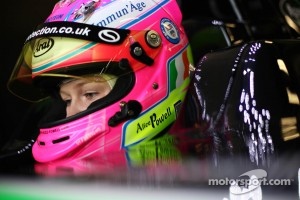 19 year old British racer Alice Powell clinched her first GP3 Series Drivers’ Championship point in the season finale at Monza this weekend. She is also the first female driver to score a point in the Series, making history at the iconic Italian track. It was Alice’s first time at the Autodromo Nationale Monza and her weekend kicked off with free practice on Friday.

It was a productive session as Alice learn the track and worked with her Status Grand Prix team to set-up the car and get to grips with the hard tyre option. She ended the day in a comfortable 12th position on the time sheets.

On Saturday morning Alice used only one set of new tyres in qualifying to save a set for the races ahead. The Status GP car had good pace around the track, but Alice was unable to utilise tow from a car in front and was only able to set a time of 1:45.303 seconds to sit in P22 at the end of the session.

She was, however, later promoted to P21 for the start of race one following a penalty issued to Kevin Ceccon. Alice made a decent start to race one on Saturday afternoon. She gained a couple of places before turn one and moved up a further position later in the lap when eventual 2012 Championship winner Mitch Evans went off at turn seven.

Alice had a good battle with Visou and Brundle and managed to overtake them both into turn one on lap four. From then on she got her head down to try and catch the pack in front and made great effort avoiding further race incidents to reach P12 at the chequered flag. 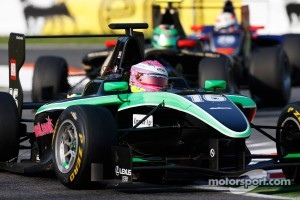 After a poor start to race two on Sunday morning, falling back to P15 from P12, Alice took advantage of Conor Daly’s visit to the gravel trap to be up to P14 by the end of lap one. A good battle with Alex Brundle meant that the pair started to lose touch with the group ahead, however Alice managed to break away from Brundle and start to reel in the front runners.

Following an off by Mitch Evans and an incident between Will Buller and David Fumanelli, Alice was now charging in P11 with three laps of the race remaining. She then challenged Kevin Ceccon, who she passed going into turn four only to be retaken at the start of the final lap.

Determined to make a strong finish and to regain position, Alice got a decent tow coming out of turn seven and hit the brakes late for turn eight in a move that enabled her to cross the finish line in a well deserved P10.

Fortunately for Alice, Vaino and Pal Kiss received post race penalties which meant that she was promoted to an 8th place finish and therefore awarded her first GP3 Drivers’ Championship point - the first ever to be received by a female racing driver in the Series too!

Alice Powell, Driver #16 Status Grand Prix, GP3 Team: "To end the weekend like we did is great! Even though qualifying did not go to plan, it has been a good weekend with two solid results. To get my first point in GP3 is brilliant and I am so chuffed. Status Grand Prix has done a great job and helped me so much this year, so to finish the weekend with a top eight finish is fantastic.

I have learnt so much throughout the year and could not have learnt the amount I did if it wasn't for help of the Status crew - so a big thanks to them. Huge thanks also to all of my sponsors this year; it is great to get a good result for them and I hope to raise enough sponsorship to compete in the fantastic GP3 Series next year."

Simon Cayzer, #16 Engineer, Status Grand Prix, GP3 team: “It's fantastic that Alice finishes the season with a point score. She has always shown great speed during the season, but getting on the points table had been our target for some races now.

To be the first female driver to achieve this in the GP3 Series is a great achievement and it's testament to all the hard work Alice puts in both on and off the track. The final two rounds at Spa and Monza are 'big' tracks with famous corners that require huge commitment.

Alice got on top of these circuits very quickly and everyone has been very impressed with her race-craft during these races. Alice was consistently one the fastest drivers in sector two at Monza throughout the whole weekend. Now we look forward to 2013 with the new era GP3 car and sincerely hope that Alice can be with us again next year.”

Mixed fortunes for Atech in series finale at Monza

Buller to make F3.5 return with RP at Monza

Buller to sub for Li at Norisring