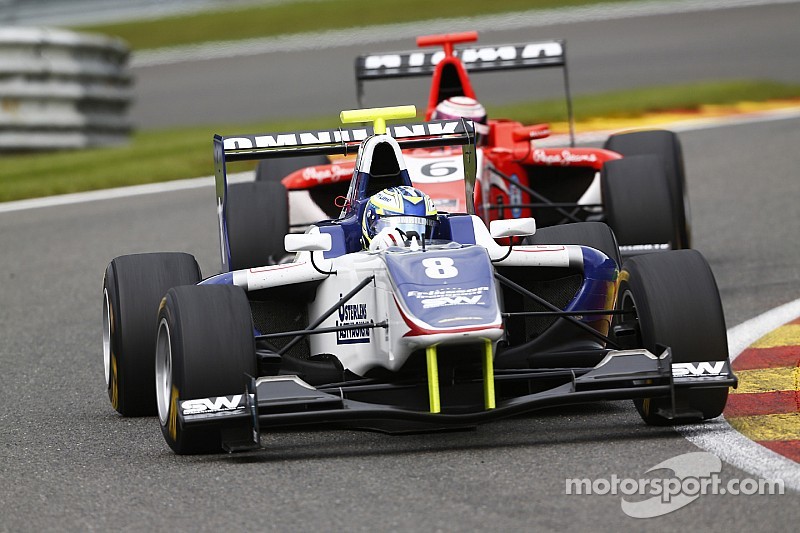 After two disappointing weekends Swedish star Jimmy Eriksson bounced back and showed his very best after converting pole into a brilliant win in the opening race of Round 7 of the 2014 GP3 Series at Monza. The Koiranen GP driver fought off the hard charging Dino Zamparelli (ART Grand Prix) to take his second win of the season. It was a strong result for the French squad with Marvin Kirchhöfer also on the rostrum in third.

Eriksson made a good getaway to retain the lead at the start of the 17 lap race with Zamparelli maintaining second. Arden International’s Robert Visoiu jumped up to third from seventh whilst Kirchhöfer also made an excellent start from P8 to P4. The Status Grand Prix pair of Nick Yelloly and Richie Stanaway dropped places after turn one after several drivers including Series leader Alex Lynn had to run over the chicane to avoid making contact.

Eriksson pulled a small advantage at the front to Zamparelli whilst Visoiu fell into the clutches of Kirchhöfer. The German was eager to find a way past the Romanian as the two diced early on. There was an incident at Turn 1 between Alex Fontana and Luca Ghiotto as the two made contact, soon followed Santiago Urrutia and Sebastian Balthasar having a small coming together which ruled all drivers out of the race.

Carlin and Red Bull Junior driver Lynn was holding P8 and set his sights on passing Patrick Kujala. He got the job done with Marussia Manor Racing’s Dean Stoneman his next target. Visoiu was issued with a drive through penalty after stewards found he had over-took under yellow flags. Therefore the Arden International driver served his penalty from third place and ended up finishing P19.

This promoted Kirchhöfer into a podium place with Emil Bernstorff, Stoneman and Lynn hot in pursuit. Eriksson had controlled the lead at a steady two second advantage to Zamparelli, but as the laps ticked down and tyres began to degrade (Eriksson was on an old set compared to Zamparelli’s new set) – the ART Grand Prix driver began to reel the Swede in.

Lynn was doing all he could to pass fellow Brit Stoneman whilst Zamparelli cut the deficit to Eriksson to 0.8s on the final lap. Despite his best efforts, Zamparelli ran out of laps to put the hammer down and Eriksson claimed a lights to flag victory for Koiranen GP, his second of his GP3 career. Zamparelli crossed the line just 0.674s behind the Swede to record another rostrum as well as bagging two extra points for fastest lap. Kirchhöfer was happy to be back on the rostrum with his second podium of the season.

Bernstorff, Stoneman, Lynn, Kujala, Mathéo Tuscher, Stanaway and Yelloly completed the top ten. Lynn extended his lead in the Drivers’ Standings to 38 points over Stanaway. Eriksson has moved up third on 114, with Bernstorff and Zamparelli on 103 and 101 respectively.

Carlin increased their advantage at the head of the Teams’ Standings on 268 points with Status Grand Prix in second on 219 and ART Grand Prix on 216.

Race 2 will commence at 09.25 local time tomorrow morning with Tuscher on reverse pole.