Marussia Manor Racing’s Tio Ellinas on top on a very chilly day one for the GP3 teams at Silverstone. Carlos Sainz Jnr set the best time in the morning session.

Tio Ellinas recorded the fastest time in the afternoon session on day one of the official pre-season test at the Northamptonshire circuit. The Cypriot’s quickest time of 1:46.211 was 3.9 seconds quicker than the previous GP3 record set by Mitch Evans here in 2012 with the first generation car. Carlos Sainz Jnr set the best time in the morning session.

Very chilly temperatures greeted the GP3 paddock for the final two-day pre-season test. The sun may have been shining but with ground temperatures below zero as the test begun, the full grid of 27 drivers set their installation laps and returned to the pits and waited for the winds to die down and for the track to warm up. 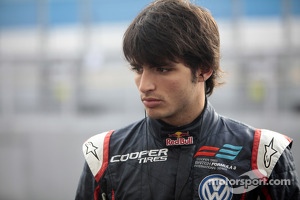 Alex Fontana (Jenzer Motorsport) and Nick Cassidy (Marussia Manor Racing) were the first two drivers to set times in the 1m47’s with a hype of activity in the last hour with the majority of drivers braving the big freeze. Ellinas and David Fumanelli (Trident) shot to the head of the timings until Spaniard Sainz Jnr went half a second quicker than the Cypriot to end the morning on top.

Following the two hour lunch break, the session got underway with an early red flag for Regalia who stopped on the circuit whilst teammate Jack Harvey topped the timesheets. Melville McKee (Bamboo Racing) was P1 at the midway point when Luis Sa Silva (Carlin) ran wide at Becketts and kissed the barrier, whilst Fumanelli stopped on circuit which both caused small interruptions to proceedings.

Yelloly rose to P2 as the wind increased making driving conditions difficult. Regalia posted the best time of the day while Adderly Fong (Status Grand Prix) ran wide at Chapel at the latter stages of the day as there was a brief stoppage covered by red flags. With one minute left on the clock, Ellinas went a mere 0.036s faster than the Argentine to claim P1.

Trident continues in successful preparations for the new season