Dino Zamparelli (ART Grand Prix) set the pace on day one of the first pre-season test in Portugal with a laptime of 1:29.145. Jimmy Eriksson (Koiranen GP) topped the timesheets in a wet afternoon session in a 1:29.183

The 2014 GP3 Series got underway at the Circuito Estoril. Eight teams are on track for this two day test in Portugal with newcomers Hilmer Motorsport making their maiden appearance at the Jerez test on April 10-11th.

Carlin’s new recruit Alex Lynn was first to head out onto the track in cool and overcast conditions. Nick Yelloly who has switched to Status Grand Prix for this campaign topped the early timings before Zamparelli claimed P1 in the standings with a 1:30.270. After a few drops of rain had fell early on, the sun decided to join us as the midway point of the morning session whilst the glorious sound of the GP3 cars rung out. 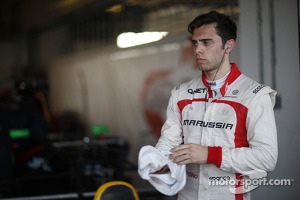 Yelloly retook top spot in the timings for a brief time until Arden International’s Robert Visoiu bettered his lap. The Brit came back for more though and was the first driver to break into the 1m29s barrier. It was a Status Grand Prix 1-2 with Richie Stanaway close in pursuit until the Carlin pairing of Lynn and Emil Bernstorff toppled them.

Following the two hour break, Eriksson and Carmen Jorda were first to feed onto the circuit. The Swede held P1 ahead of Dean Stoneman and Marvin Kirchhofer. The first red flag off the day occurred when Victor Carbone’s Trident car stopped on track. Around forty-five minutes into the afternoon session, the heavens opened, with the drivers opting to return to their garages. After a quick spell of no activity on track and further rain hammering down, the drivers got to grips with the tricky conditions in the final hour as they contended with the spray.

There was a short red flag period when Sa Silva went off in the gravel in the closing stages but with drivers unable to improve on their laptimes, the top positions remained as per the beginning part of the afternoon session. Eriksson ended the afternoon quickest in front of Stoneman, Kirchhofer, Stanaway, Lynn, Urrutia, Visoiu, Sa Silva, Patrick Kujala and Yelloly.