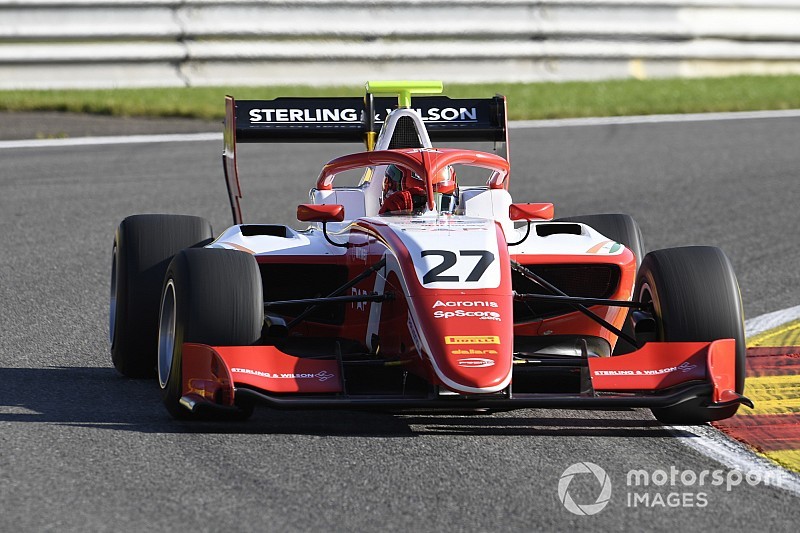 Prema driver Jehan Daruvala became the sixth pole-sitter in as many rounds in the new FIA Formula 3 Championship in a frenetic qualifying session at Spa.

Trident Racing – which took pole and won with David Beckmann in the GP3 Series at Spa last season – looked dominant with Pedro Piquet and Devlin DeFrancesco 0.3s clear of the pack after the first bout of flying laps.

But with 30 cars laying down rubber and improving the track constantly, a flurry of late laps mixed up the order.

Most drivers could only extract one lap out of the tyres before they passed the prime operating window.

Daruvala left it late for Prema Racing and did all the hard work in the tricky middle sector to go 0.231s quicker than Piquet and seal pole. It could be key for his championship bid, four points boosting his third position in the series and leaving him just 16 off the lead.

Third behind Daruvala and Piquet was Red Bull's F3 rookie Yuki Tsunoda for Jenzer, while points leader Robert Shwartzman earned fourth, the Prema-run Ferrari junior attempting to improve with a second lap on his last set of tyres, which proved unfruitful.

The second Hitech-run car of Leonardo Pulcini – a winner at Silverstone – took ninth ahead of another Red Bull junior, Liam Lawson.

Max Fewtrell was the best ART Grand Prix car in 12th after a nightmare session for the top single-seater outfit. Christian Lundgaard – winner at the last round in Hungary – was 14th while Beckmann continued his disappointing season with 17th.

The third Prema of Marcus Armstrong was way down the order, in 19th, which will hurt his championship aspirations. The Ferrari junior – fourth in the championship – decided to drop back in the running order for track position, therefore foregoing the time for a second lap on his tyres.

It proved the right call as few improved on their second laps, but nailing the first lap was key and Armstrong 1.2s off the best time.