Daly fighting for the Championship

The Formula One support series, GP3, will decide its champion in a straight fight showdown in Abu Dhabi this weekend, November 2nd/3rd. After 14 races in seven different countries the top four in the championship are separated by 34 points. Leading the championship is Argentinian, Facu Regalia with 138 points, from new Toro Rosso Formula One signing, Russian, Daniil Kvyat, with Finn, Kevin Korjus and American, Conor Daly, on 107 and 104 points respectively. As it has been all season, it will be all about who can qualify at the front and control the race with a good start on Saturday.

GP3 this year has been all about how you qualify and start the races - very much like Formula One. Abu Dhabi will be the same. Luck can play a big role and I think I deserve a bit of a break after Monza," said Daly. 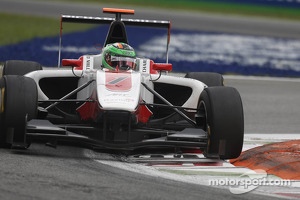 Daly proved to be the fastest of all at the last round in Monza, Italy, but he was taken out at the first corner by an out of control competitor who wreaked havoc on the front runners when he lost control in the braking area and wiped out several of the front running cars including Daly. Daly was forced to retire and start the second race on Sunday from the back of the grid. He charged through the field setting fastest race lap on his way to an impressive eighth place finish.

"I hope that someone else's mistake at Monza does not cost us a chance at the championship," said Daly. "There is nothing we can do but it is a little frustrating."

Daly did a private test session on the Yas Marina circuit in early October as part of his preparations and he hopes that that track knowledge will help him get on the pace as quickly as possible. "It was a big effort to travel to Abu Dhabi for a short test session but we are pulling out all the stops to make every effort to win the championship," commented Daly.

Daly will travel to Abu Dhabi three days early to be as acclimatized as possible prior to the first practice session late Friday morning local time.

Kvyat sets the pace in Free Practice at Abu Dhabi