Conor Daly remains in the points hunt for this year's GP3 Series Championship.

So much has to go right in GP3 and today American Conor Daly ticked most of the right boxes bringing his ART GP car home in second place at the Hungaroring in Hungary. His podium finish also took an 18 point chunk out of championship leader, Tio Ellinas' points lead, moving Daly to fourth place, 21 points behind. 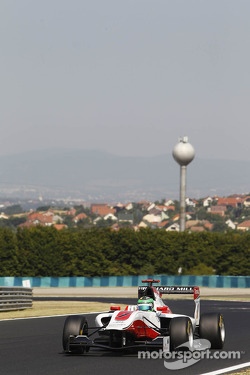 In this morning's qualifying session, Daly did everything right and came within 20 seconds of securing his second pole position of the season. After his two qualifying runs, he sat on top of the time charts until Finnish driver, Aaro Vainio just pipped him in the dying seconds of the session. "That sucked," said Daly. "I was hoping I could hang on to the pole. The car wasn't bad but it was not a perfect lap."

When the start lights went out, Daly and Vainio got good starts from the front row and proceeded to dominate the race. They pulled a gap on third place but Daly was not quite able to match Vainio's leading pace. With five laps to go a big crash at turn one brought out the safety car and with two laps to go, Daly made a move to Vainio's outside at turn one. Vainio resisted by keeping a tight inside line and at turn two Daly's on board camera showed him trying a brave move to again attempt to go around the outside of the leader. He was unable to make the move stick and he followed Vainio home a mere half a second behind.

"It is just so close and so hard to pass cars, so I was adjusting my lines to see where I might be able to make up time," said Daly. "I was just a little slower than Vainio and the restart was my last chance, but when I was outside him at turn two I thought that it would be better to be on the podium than in the bushes, so I backed off."

With the top eight reverse grid position for tomorrow, Daly will line up seventh.

Championship positions at the conclusion of today's feature race are: Ellinas, 91; Regalia, 80; Vainio, 75, and Daly, 70.

Vainio holds off Daly for win in Budapest

Simmons replaces Yeany at Charouz for F3 finale in Sochi

Simmons replaces Yeany at Charouz for F3 finale in Sochi