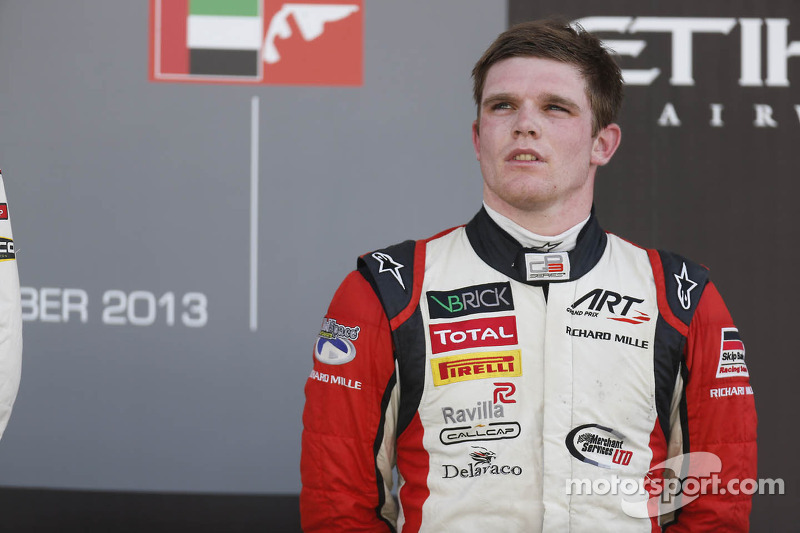 He could not move up to second place but he could loose third place in the GP3 Championship this morning at the Yas Marina Circuit in Abu Dhabi, but another strong start and mistake free race saw American, Conor Daly round out the championship with a third place podium finish which also secured a third place championship finish. 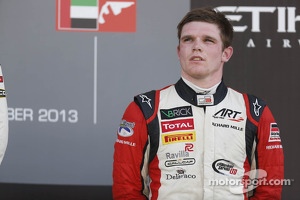 Under blazing Middle Eastern heat, Daly jumped from his fifth place starting position and entered turn one in fourth place. As drivers jockeyed for position Daly darted to the high line and drove around the outside of pole sitter, Kevin Korjus to grab third place. The race quickly settled down with Cypriot, Tio Elllinas leading from Brit, Dean Stoneman.

Ellinas pulled a gap of almost two seconds by lap ten before Daly started to reel in both front runners. Starting the last lap Ellinas was struggling with excessive tire wear but he was able to hold on to cross the line first with the top three covered by a mere seven tenths of a second.

In addition to his third place championship trophy that he collected at the awards banquet that night, Daly was also surprised to learn that his helmet was voted by GP3 fans as the best color scheme in GP3. He was awarded a Dallara trophy and of course received some applause and friendly ribbing from his fellow competitors.

Daly's ART Grand Prix team, for the fourth successive year, also collected the winning team award for scoring the most championship points as a team throughout the season.

Daly drove for the French based ART Grand Prix team, which is regarded as one of Europe's best junior teams. Past drivers to have gone through ART include current Formula One drivers such as; Lewis Hamilton, Nico Rosberg, Sebastian Vettel, Adrian Sutil, Jules Bianchi and Paul DiResta.