© 2021 Motorsport Network. All rights reserved.
TV Tickets Fashion Giorgio Piola Jobs
Previous / Kimi Raikkonen at the wheel of the GP3/13 car Next / Back in business at Spa-Francorchamps
FIA F3 Preview

Daly is coming to his favorite race track - Spa-Francorchamps

The Formula One summer break is now over and after spending time at home in America, Conor Daly travels to Spa-Francorchamps, Belgium for the weekend for rounds 11 & 12 of the F1 support series, GP3.

"Spa might be my favorite circuit," said Daly. "It has everything to challenge a driver from Eau Rough to flat out blasts through what feels like the countryside. Rain or shine I always look forward to Spa." 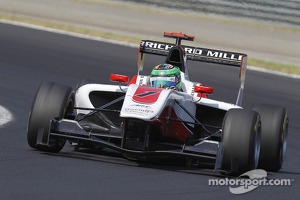 Spa will play a key role for Daly as the season's championship plays itself out in the six remaining races. After two bad weekends in a row in England and Germany, Daly fell 39 points behind championship leader, Tio Ellinas. In Hungary, just four weeks ago, Daly chopped that deficit almost in half to 20 points with a second place podium finish. There is now a six way fight for the championship between drivers from six different countries.

"There is no real agenda from here on," said Daly. "The only thing I need is outright speed in qualifying and start up front. After that, all I can do is wait and see what happens to everyone else."

Kimi Raikkonen at the wheel of the GP3/13 car

Back in business at Spa-Francorchamps